SHE & HIM ANNOUNCE NEW VIDEO FOR SINGLE STAY AWHILE, CLASSICS OUT DEC 5TH 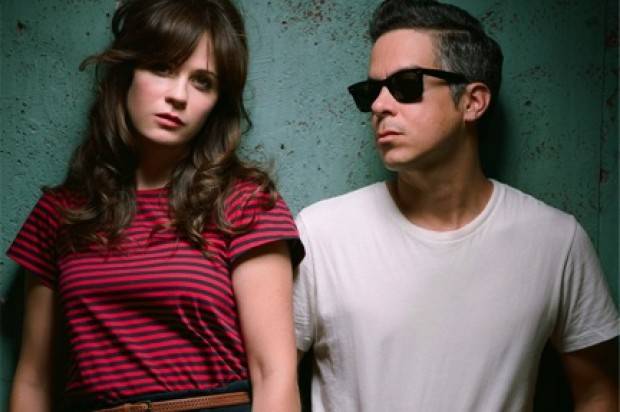 SHE &HIM VIDEO FOR SINGLE “STAY AWHILE” PREMIERES ON VEVO TODAY
CLASSICS DUE OUT DECEMBER 5th
PRE ORDER NOW –
http://smarturl.it/classics_itunes http://smarturl.it/SheandHimClassics.JB
“Deschanel wraps her velvety voice around the love song’s lyrics, infusing them with a sense of urgency by holding notes to their near breaking point. Ward, meanwhile, plays snaking Dick Dale-like licks that would fit nicely on the soundtrack to a Quentin Tarantino film.” – Rolling Stone
She & Him – comprised of Zooey Deschanel and M. Ward – announce the release of their gravity- defying new video for ‘Stay Awhile’ off their upcoming album CLASSICS, hitting December 5th via Columbia Records through Sony Music Entertainment Australia. Watch the VEVO debut HERE.
She & Him both honor the Dusty Springfield classic and make the song their own with the refreshing clip, helmed by noted directorial team CANADA (whose video credits include Phoenix, Oh Land, Scissor Sisters,Battles,Justice,Vaccines,amongothers). Thevideodepictstheever-stoicM.Wardstrumminga special brand of guitar, while Deschanel dances around the warmth of domestic life in an era- appropriate house, proving she can do it all, yes, even levitate. And what dips!
    
The band’s rendition of Springfield’s signature 1964 missive is one of thirteen quintessential gems on Classics, featuring timeless standards by singers such as Frank Sinatra, Ella Fitzgerald, Elvis Costello, ArethaFranklin,andVanMorrison,amongothers(tracklistingbelow). CLASSICSisavailableforpre- order via iTunes HERE, with ‘Stay Awhile’, ‘Time After Time’, ‘Oh No, Not My Baby’ and ‘Stars Fell on Alabama’ available as instant grat tracks.

In honor of the full-bodied sound of the original classics, She & Him recorded the album live, including full brass, strings, piano, bass, guitar, drums and flute on their rendition of Springfield’s classic melody. Ward’s guitar shimmers and flows beside Deschanel’s whole-hearted and warm vibrato, weaving a hearty live version that allows for the spontaneity that captured the spirit of the songs in their truest form.

Recently, She & Him performed another song from the album ‘Time After Time’ on NBC’s Today Show (originally sung by Frank Sinatra and Shirley Bassey, among others), as well as delivering a hypnotic performance of ‘Stay Awhile’ on The Tonight Show Starring Jimmy Fallon, accompanied by The Roots.

She & Him’s first two albums, VOLUME ONE and VOLUME TWO, were included on NPR’s Listeners’ Pick Best Music list. VOLUME TWO was also #1 on the US Rock, Folk, and Independent Charts for several weeks. From there, the band’s A VERY SHE & HIM CHRISTMAS was included on Rolling Stone’s 25 Greatest Christmas Albums of All-Time. VOLUME 3 was released in 2013, and Pitchfork applauded Deschanel’s “certain kind of charisma that allows a song to hang loosely but never fall apart,” continuing, “Ward gives them enough room to sway leisurely, as though a warm breeze is rustling through.”

“On ‘Stay Awhile’ Deschanel and Ward have totally re-imagined the love-sick ballad. What was once a more upbeat, slightly rock-inspired number has been re-imagined as a mournful country tune, complete with dusty orchestration and some especially heartbroken wailing from Deschanel.” – Consequence of Sound

“Zooey Deschanel (She) and M. Ward (Him) performed Dusty Springfield’s “Stay Awhile” with a little help from the Roots, and, impressively, managed to make the 50-year-old song seem fresh and bubbly while remaining undeniably of its age.” – Spin (on The Tonight Show performance)

3. It’s Not for Me to Say
(1957 music by Robert Allen / lyrics by Al Stillman) Recorded by: Johnny Mathis

5. This Girl’s In Love With You
(1959 written by Burt Bacharach and Hal David) Recorded by: Herb Alpert

12. Would You Like to Take a Walk
(1930 music by Harry Warren / lyrics by Mort Dixon and Billy Rose) Recorded by: Ella Fitzgerald & Louis Armstrong