She & Him have this week released their new single, ‘Stay Awhile’, the first taste of their upcoming album, CLASSICS, hitting December 5th via Columbia Records through Sony Music Entertainment Australia. The pre-order of CLASSICS is live via iTunes HERE, with ‘Stay Awhile’ is available as an instant download.

The band’s rendition of Dusty Springfield’s 1964 love song is one of thirteen standards chosen from all corners of the extensive musical canon of Zooey Deschanel and M. Ward — “She” & “Him” respectively. The band have also revealed the full track list of the thoughtfully chosen standards on CLASSICS, as well as the album cover.

In honour of the full-bodied sound of the original classics, She & Him recorded the album live, including full brass, strings, piano, bass, guitar, drums and flute on their rendition of Springfield’s classic melody. Ward’s guitar shimmers and flows beside Deschanel’s whole-hearted and warm vibrato, weaving a hearty live version that allows for the spontaneity that captured the spirit of the songs in their truest form.

The band’s first two albums, VOLUME ONE and VOLUME TWO, were included on NPR’s Listeners’ Pick Best Music list. VOLUME TWO was also #1 on the US Rock, Folk, and Independent Charts for several weeks. From there, the band’s A VERY SHE & HIM CHRISTMAS was included on Rolling Stone’s 25 Greatest Christmas Albums of All-Time. VOLUME 3 was released in 2013, and Pitchfork applauded Deschanel’s “certain kind of charisma that allows a song to hang loosely but never fall apart,” continuing, “Ward gives them enough room to sway leisurely, as though a warm breeze is rustling through.” 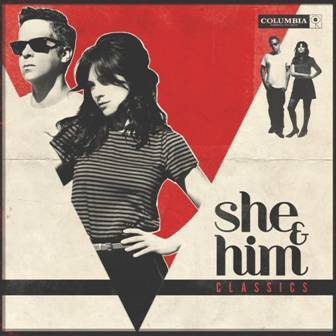 She & Him
Track Listing

3. It’s Not for Me to Say
(1957 music by Robert Allen / lyrics by Al Stillman)
Recorded by: Johnny Mathis

5. This Girl’s In Love With You
(1959 written by Burt Bacharach and Hal David)
Recorded by: Herb Alpert

12. Would You Like to Take a Walk
(1930 music by Harry Warren / lyrics by Mort Dixon and Billy Rose)
Recorded by: Ella Fitzgerald & Louis Armstrong