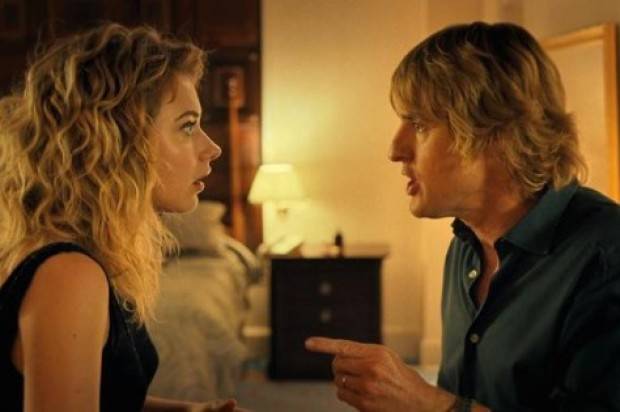 Hoping to re-capture the spirit of the screwball farce comedy of yesteryear, Peter Bogdanovich’s ‘She’s Funny That Way’ has a certain classic Woody Allen-ness to it with its wry comedic style and a general heightened sense of self. As it alludes to the audience that it’s riffing on the idea of filmmaking – with several unsubtle ingredients like a detective in full ‘Pink Panther’ attire and a cameo from a particularly famous director known for borrowing ideas from old films – Bogdanovich’s attempt at throwing back to a simpler time of comedy becomes its own enemy as its manic energy, good natured as it is, can’t sustain a brisk eighty minute runtime without feeling a little flat.

The film’s downfalls aren’t for a lack of trying though as ‘She’s Funny That Way’ – original titled ‘Squirrel To The Nuts (a more appropriate title) – boasts one of the more impressive ensembles of late and has a neat, comedy-ready plot that feels rife for humorous consistency. The film centres around Brooklyn prostitute Isabella (Imogen Poots) who is recalling her road to stardom in a sit-down interview with a journalist, Judy (Illeana Douglas), who doesn’t seem entirely sold on the story she’s being fed. A call-girl who dreams of being an actor, Isabella gets her big break when she auditions for famed director Arnold Albertson (Owen Wilson), only to realise that she’s met him previously under a different moniker when he hired her for her evening services. Despite being married to Broadway star Delta Simmons (Kathryn Hahn), Arnold is a frequent customer of madam Vickie (Debi Mazar) whose girls all have their lives changed after spending the night with Arnold on the notion that he pays them an additional $30,000 to get out of the prostitution field and start their life over with his handsome cheque as a much-needed boost. Isabella happens to take her money to make her acting dreams come true, so it only makes sense that it would lead her to audition for Arnold’s play with Delta in attendance. It only escalates from there when playwright Joshua (Will Forte) starts to fall for Isabella, despite his relationship with hot-tempered therapist Jane (Jennifer Aniston), who may or may not be treating Isabella. Throw in a randy actor, Seth (Rhys Ifans), who has his sights set firmly on Delta, and a jealous judge (Austin Pendleton) whose connections to Isabella, Jane and Joshua goes beyond the point of coincidence, and you have a particularly convoluted, sitcom-ready set-up that should be executed at ease for a director like Bogdanovich.

It’s all so far-fetched and grounded in theatricality that you can’t help but emerge from the film feeling underwhelmed as all the talent involved are clearly giving their all, and there are the slightest moments of comedic greatness peppered throughout (a restaurant sequence where all the characters come together under separate circumstances showcases the kind of farcical potential the film holds) that it’s quite sad when it culminates in a film that offers up sporadic laughter. The cast all feel right at home as they revel in the sheer stupidity of their surroundings with Ifans feeling particularly comfortable as a heartthrob-type actor, despite his unconventional movie-star looks, and Wilson manages to make his cheating Arnold still immensely likeable. Poots, with her accentuated Brooklyn accent, once again elevates the thin material she’s given with an effortless charm, Aniston seems to be enjoying herself as she throws the “America’s sweetheart” tag away in a seriously bitter turn, whilst Hahn wholly embraces the Bogdanovich spirit with a performance that feels the most natural despite her surroundings.

Whilst I could perhaps be deemed too young to truly appreciate a film like ‘She’s Funny That Way’ I understand the vibe Bogdanovich was striving for, and I commend him on making a comedy in this vein and not succumbing to the more crass type of humour that runs far more rampant in today’s market. As much as I respected its throwback style I was still left wanting a film with more comedic steadiness and when you have so much proven talent on board, it’s a sting that hurts just a bit more.