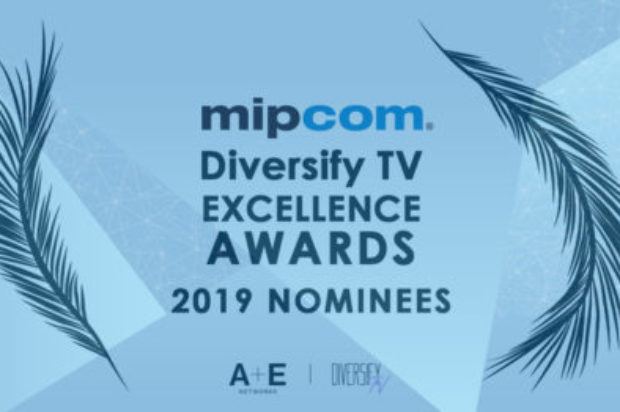 Reed MIDEM today announces the shortlist of programmes in the running for the MIPCOM Diversify TV Excellence Awards 2019.

Dedicated to championing and promoting diverse and inclusive content that can make an impact on wide audiences, the third edition of the MIPCOM Diversify TV Excellence Awards will be held on Monday 14 October 2019, at the Carlton Hotel, Cannes, France. The awards are part of the world’s entertainment content market, MIPCOM, which takes place in Cannes from 14-17 October.

The 21 nominated programmes, all of which have been broadcast in the past 12 months, have been recognized by the Pre-Selection Jury for providing a fair and accurate representation of BAME, LGBTQ+ and disabled communities. They are also seen as standing out for originality and excellence in terms of storytelling, casting and production values, challenging stereotypes, and showing a positive impact.

The winning programmes will be chosen by charitable organisations that campaign for equality and inclusion, including GADIM, GLAAD, ILGA-Europe, Minority Rights, Race Equality Foundation, SCOPE, Show Racism the Red Card, and Sporting Equals, and will be announced at the MIPCOM Diversify TV Excellence Awards ceremony, an invitation-only event for some 200 leading TV executives, held in partnership with A+E Networks and Diversify TV.

The shortlist features an eclectic selection highlighting a variety of voices and talent from around the world, from major linear and non-linear broadcasters representing 11 countries across all continents. Themes tackled include love, friendship, family, heritage, and humour, as well as challenges and issues of inequality.

The shortlisted programmes are:

The MIPCOM Diversify TV Excellence Awards are part of the Diversity & Inclusion Programme featuring events and conferences at MIPCOM and the preceding kids’ content market, MIPJunior.

At MIPCOM, these include:

MIPCOM Media Mastermind Keynote & Variety Vanguard Award: RuPaul Charles, host and Executive Producer of “RuPaul’s Drag Race” – Monday 14 October. Since 2009, RuPaul Charles has executive produced and hosted the reality competition series “RuPaul’s Drag Race”, for which he received six Primetime Emmy Awards in 2016, 2017, 2018 and 2019. At MIPCOM, he will accept the Variety Vanguard Award, which recognises television industry leaders who have made a significant contribution to the global business of entertainment. “’RuPaul’s Drag Race’ is a show about queer people, by queer people, for queer people. Our message of love, inclusion and acceptance has connected with sweet, sensitive, creative souls around the world,” said RuPaul.

Measuring the Impact of Diversity on Audience Potential – Wednesday 16 October
As recent hit films and TV series have shown, diverse and inclusive content has a tremendous impact not only on audience satisfaction, but on financial success. Experts from research agencies and content makers 3Vision, Parrot Analytics, A+E Networks and AMC Networks International will discuss how measuring this type of data – from development to distribution – can help producers and broadcasters leverage this information to test their shows, predict audience reach, and discover how it translates into sales.

Visibility of LGBTQI+ Representation in Kids’ Content – Sunday 13 October
On the heels of last year’s successful conversation on diversity and inclusion, this year’s group discussion will feature an in-depth focus on the representation of the LGBTQI+ community in kids’ content. As 2019 marks the 50th anniversary of the historic Stonewall riots in NYC, how can we, as an industry, move forward and make demonstrable change? In this interactive session, broadcasters and producers will share best practices and lead the way forward.