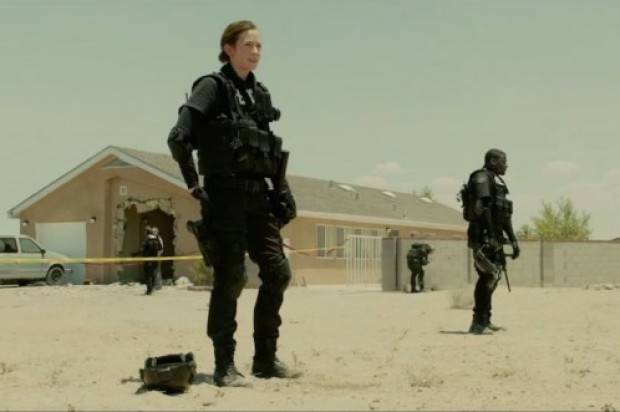 Though it has enough of the thrills and action of a ripe Hollywood blockbuster, at its core ‘Sicario’ is a brooding film laced with complications and a shade that’s very much in the grey. A dark, harrowing look at the war on drugs (is it ever anything else though?), the film’s heated temperament and immense intensity feel like an organic move for director Denis Villeneuve after his stellar drama ‘Prisoners’. Much like that film, vengeance plays a major part in the proceedings and the act ultimately proves hollow despite its initial satisfaction.

In terms of story, the less you know the better, but the surface plotline details idealistic FBI agent Kate Macer (Emily Blunt) as she is recruited by a government operative (Josh Brolin) to assist in unearthing a well-insulated drug lord in Mexico following the discovery of a houseful of corpses in a routine drug-bust. Much like the naïve Kate, we as an audience are kept in the dark for a serious portion of the running time before the rug is finally swept from underneath, and the conclusion is astounding, to say the least. Though Villeneuve’s displayed his tact at how to tell the best story he can without any unnecessary additives, it’s his skill at evoking top-notch performances that proves his strongest suit and, without question, ‘Sicario’ provides Blunt and Benicio Del Toro with some of the strongest material they’ve worked with.

As ‘Edge of Tomorrow’ showcased her ease at playing the gritty heroine, Blunt’s evolution into a genre runner continues here, though her character is far more vulnerable as she still believes in the strength of the system she works for and the age-old notion of good and evil; her character is our ethical compass and the humanity she possesses grounds the film with an emotional fundamentality we can’t help but respond to. As great as she is though, this film can’t help but belong to Del Toro’s titular hitman (‘Sicario’ means hitman in Latin) who emerges as its most complex; his animalistic nature clearly a result of a brutalized past that has essentially shattered the former upstanding citizen he possibly self-recognizes in Blunt’s character. All the cast are superb though with Brolin clearly relishing his operative role that unnervingly mixes stern authority with a laid-back mind-set, Daniel Kaluuya as Blunt’s green law-school partner, and Jon Bernthal whose extended cameo as a fellow agent leads to one of the feature’s more intense sequences.

I found everything about ‘Sicario’ practically flawless in its execution, I dare say it’s a modern masterpiece in the thriller genre, owning its wicked nature and unrelenting passion in the process. Villeneuve has once again proven his worth as one of his generation’s finest filmmakers, and I can only anticipate what he will unleash on us next.