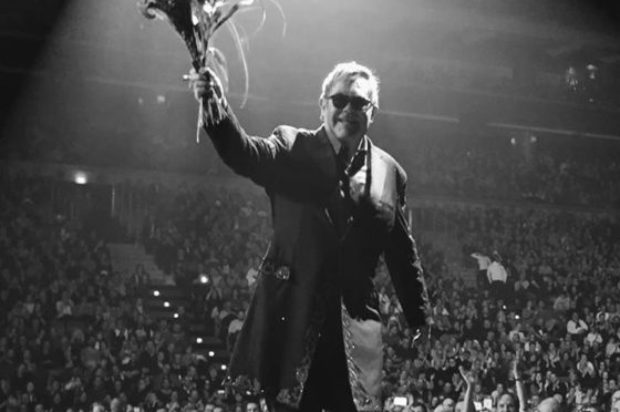 Premier Annastacia Palaszczuk today welcomed a major musical coup for North Queensland, with Sir Elton John’s exclusive Once In A Lifetime Tour set to hit Mackay and Cairns in September 2017.

In Mackay for the announcement, Premier Palaszczuk said the two concerts combined were expected to attract crowds of more than 24,000 people.

“Queensland is the only state to secure two performances on the Australian leg of this world-class tour – and they’re both in North Queensland,” Ms Palaszczuk said.

“Bringing one of the world’s biggest names in music to Mackay and Cairns is a major win for this region, particularly the local tourism industry.

“This will be the first and last time Sir Elton John will perform in the region, so for many locals it will be their only opportunity to experience a live performance by one of the most highly acclaimed and successful solo artists in the world.

“It will also be a chance for us to showcase Mackay and Cairns to an international audience, with up to 5000 interstate and international visitors set to enjoy some of the best experiences and hospitality on offer in this region.”

Tourism Minister Kate Jones said the concerts were secured through a partnership between the Mackay and Cairns councils and Tourism and Events Queensland.

“High profile events like this are a great source of community pride and provide a welcome economic boost to regional economies through driving visitation.

“The two Elton John concerts are expected to inject up to $7.5 million into the Queensland economy.

“This is a fantastic opportunity for interstate and international fans to see a music legend and then enjoy some truly unique North Queensland experiences such as the Great Barrier Reef, our magnificent islands and beaches and rainforests.”

Ms Jones said the Once In A Lifetime Tour would be promoted by Australian entertainment business Chugg Entertainment, with tickets going on sale on Wednesday 14 March 2017.

Sir Elton John said: “I always love coming back to Australia. It holds a very special place in my heart, ever since my first visit there at the start of my world-wide career in 1971. My band and I are really looking forward to playing there again in September and this tour will be even more memorable because it will be the first time I have ever played Mackay and Cairns…which I can’t believe but there you have it. If the audiences are anything like those at all of the other shows we have done in Queensland over the years, everyone will surely be in for a wonderful crazy night!”

Mayor of Mackay Councillor Greg Williamson said it was an extremely exciting opportunity for the region.

“A concert involving an icon of the international music industry provides the ideal platform to promote Mackay’s liveability, natural assets and showcase the enormous pride within our community,” Cr Williamson said.

“This concert is tangible evidence of how we are developing partnerships to deliver significant economic benefits to our region.”

“We’re excited to welcome a performer of this calibre to our city. Sir Elton John is an icon of the international music industry and we’re thrilled that Cairns has been chosen to host the closing show of his upcoming Australian tour,” Mr Manning said.

“We are striving to make Cairns the arts and culture capital of Northern Australia and the opportunity to host this major music event will allow us to showcase our city as an arts destination.

“We look forward to working with Tourism and Events Queensland, Cazalys and the promoter to make this a truly memorable event for Far North Queensland.”

Sir Elton John and his band will open the Once In A Lifetime Tour at the BB Print Stadium Mackay on 22 September 2017 and conclude the Australian regional tour at Cazalys Stadium on 30 September 2017.