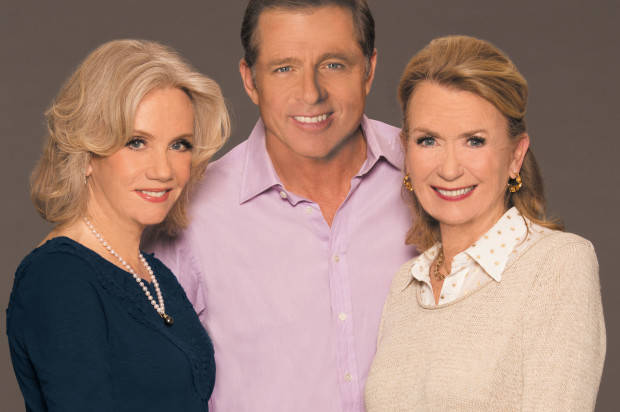 Leading Australian theatre producer John Frost today announced the return to the Australian stage by stars of screen and stage, Hayley Mills and Juliet Mills. The sisters will star in a national tour of the Australian Premiere of James Kirkwood’s hilarious and touching comedy Legends! which has broken box office records around the world wherever it has played. The Australian Premiere opens in Brisbane at QPAC in May for a strictly limited season, followed by seasons in Sydney, Perth, Adelaide and Melbourne. Tickets are on sale from 9 February.

Hayley Mills and Juliet Mills, daughters of the legendary actor Sir John Mills, previously appeared across Australia in the play Fallen Angels, and Hayley starred in John Frost’s Tony Award winning production of The King and I during the original Australian tour in 1991. Hayley appeared in several Walt Disney films, most famously the dual roles of the twins Susan and Sharon in The Parent Trap (1961) and won the Academy Juvenile Award for Pollyanna (1960). Juliet gained enormous popularity in the television sitcom Nanny and The Professor, and won Emmy Awards for her performances in the mini-series QB VII (1974) and her role in the daytime drama series Passions.

Co-starring is International heart throb Maxwell Caulfield (Grease 2, Dynasty, The Colbys). Maxwell has more than 70 film, theatre and television credits, including Gettysburg (1993), Tom DiCillio’s The Real Blonde (1987) and on television in the role of Mark Wylde in Emmerdale. Maxwell is married to Juliet Mills.

“I’m so excited to bring Hayley Mills and Juliet Mills back to Australia, and for them to perform opposite Maxwell Caulfield,” said John Frost. “The moment I read James Kirkwood’s very funny and theatrical play I immediately thought of them, and luckily they all had a gap in their schedules to travel to Australia for this five month tour. And I’m thrilled that the wonderful Christopher Renshaw, who directed Hayley in The King and I and Hayley and Juliet in Fallen Angels so long ago, is available to direct Legends!. Driving Miss Daisy showed me that Australian audiences want to see top class international stars in top quality plays. I’m sure we’re all in for a hilarious night with these legends in Legends!.”

Legends! takes audiences into a world of gossip, rivalry, reminiscence, longing and scandal. As the sun sets in Manhattan, the claws come out as two famous but fading movie stars try to upstage one another. Leatrice Monsee (Hayley Mills) and Sylvia Glenn (Juliet Mills) are hustled by a theatre producer (Maxwell Caulfield) to kick-start their once-luminous careers by starring in a Broadway–bound play. There’s just one problem: they loathe one another.

The fiery feuds of Hollywood legends Bette Davis and Joan Crawford fade in comparison to those of Leatrice Monsee and Sylvia Glenn. The fast-paced play takes audiences on a joyous journey from the glamour of Hollywood to the excitement and promise of a new lease of life on Broadway.

The pairing of Hayley Mills and Juliet Mills promises to be a sensational sister act full of back-stabbing and banter, wisdom and wit. Their consummate talents will shine in this riotous new production directed by Christopher Renshaw (The King and I), designed by Justin Nardella, written by Pulitzer Prize winner James Kirkwood (A Chorus Line), produced by John Frost and also starring Maxwell Caulfield and Leah Howard.

Season: From Thursday 28 May