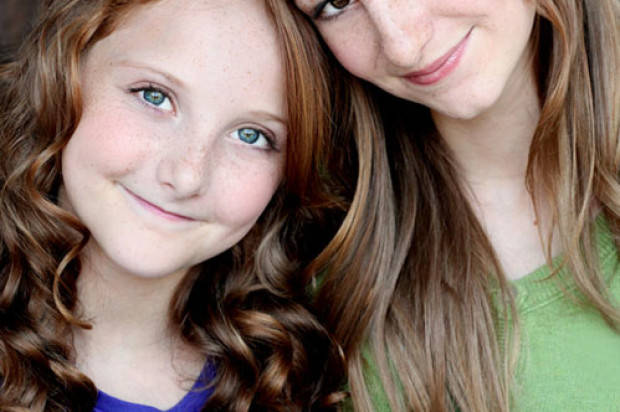 Alexandria Altman creator of ‘Cinderella Chronicles: Snow Moon’ was at a Pre Oscars event last year with her novel on display and supporting a charity event. Altman passed by two girls whom were dressed in princess’s attire and also host a Hollywood Celebrity Interview Show. She had to stop and just stare at the young, beautiful girls as they had such an interesting look, sweet, all smiles, innocence and pure little golden hearts, she couldn’t take her eyes off them, their beautiful light blue princess dresses and their long hair.

It all reminded her of her novel/movie Snow Moon as if she had seen them before, as if they belonged in the book and the movie; she simply told them “you two look like you belong in my movie”. They had also interviewed Alexandria Altman on her novel, Alexandria fell in love with these two and the rest is history. With their looks of present day beauty and long ago old souls, they were the perfect fit.

Mikayla Shae Chapman is a SAG/AFTRA actress who has appeared in several TV commercials, short films, voice-overs, PSA’s and more. Mikayla hosts her own interview show Q n’ A with Mikki and Shay with her younger sister Shayna Chapman and have interviewed many celebrities on the red carpet and events. Mikayla began her career in print modeling at the tender age of 6 months and dreams about becoming a director. Mikayla is heavily involved in her High School’s film program, news talk show and Comedy Sportz Club. Mikayla loves science fiction, fantasy and is writing her own television series and feature film. Mikayla Chapman is part of the Competitive Interscholastic Horse Polo Team. In her spare time Mikayla enjoys horseback riding, drawing, painting, reading, rock climbing and archery.

Shayna Brooke Chapman is a SAG/AFTRA actress who has appeared in several TV shows, commercials, Web Series, short Films, voice overs, PSA’s and more. Shayna hosts her own interview show Q n’ A with Mikki and Shay with her older sister Mikayla Chapman. Shayna began her journey as a print model when she was an infant. With an appetite for reading you can always find Shayna with a book in her hands. Shayna loves editing photos and videos. She runs her own Instagram channels where she uploads very creative images and videos in her free time. Shayna is on the Competitive Gymnastics Team and Interscholastic Horse Polo team. She enjoys the thrill of competing in both sports. Shayna Chapman loves the art of improv and comedy. Shayna participates in her High School Comedy Sportz team and Digital Photography club. In her spare time Shayna enjoys spending time with her horse Tosti, horseback riding, reading, rock climbing and archery.