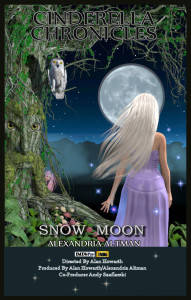 Casting Agent Stanzi Stokes now on board project at IMDBPRO as Novel series is picked up by top New York Literary Agent. Snow Moon the Movie currently has Alan Howarth as Director, it’s Writer, Alexandria Altman and Alan Howarth as Producers and Andy Szaflarski as Co-Producer.
News, movie trailer and the addition of a new Co-Producer to be announced shortly.