Speller Street Films releases AS AN ACT OF PROTEST (2001)

#africanamerican #cinematic #Durham film Movies release by Caroline Russo | on October 3, 2020 | 0 comments | in Film | Like it 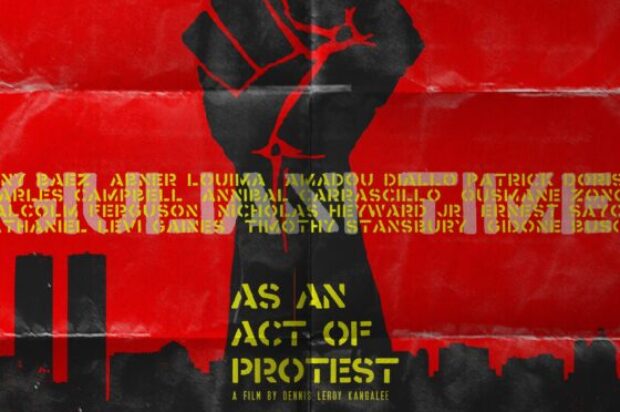 Variety: “Almost more of a documentary than a feature film, AS AN ACT OF PROTEST aims to teach and shock — and succeeds on both counts.”

AS AN ACT OF PROTEST is available now for pre-order on Vimeo On Demand and will be released worldwide on October 30, 2020.

Since 2001 its world premiere at the American Black Film Festival, the film has screened throughout Europe, but was never picked up for distribution until Speller Street Film’s worldwide release of the extended European version on October 30. “With the current racial and political climate, now is the perfect time to re-introduce this powerful film to the world once again,” said Christopher Everett, President of Speller Street Films.

“Dennis has always carried the torch of creating protest art and creating art for social change, so I am very honored to help restore and release Dennis Leroy Kangalee’s unseen gem to a new audience.”

Deemed the ‘Best black film no one will see’ in 2002 by film critic Kam Williams, AS AN ACT OF PROTEST is a cinematic poem about racism and its psychological effects. An avant-garde feature powered by a strong theatrical current rather than a foray into conventional narrative cinema, its style flows from documentary and melodrama to satire and horror.

The film follows Cairo Medina (Che Ayende), a young African American actor, who goes through a station-of-the-cross journey to find the meaning of his life and eradicate the racism and police brutality that continue to plague the world.

AS AN ACT OF PROTEST: https://vimeo.com/ondemand/protest