abc tv comedy sci fi Digital HD sci fi series trip for biscuits by Caroline Russo | on May 24, 2017 | 0 comments | in Interviews | Like it 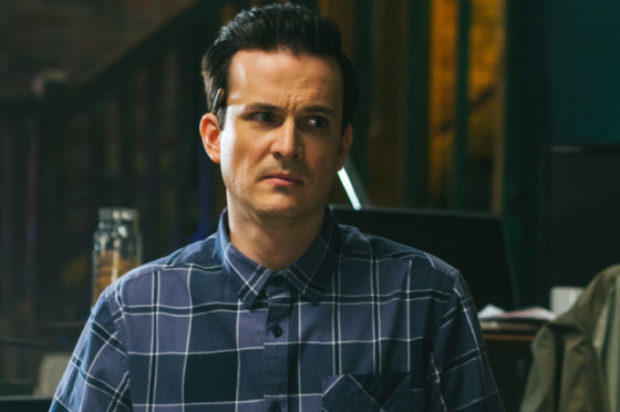 Steven O’Donnell is an Australian television presenter, actor, twitch streamer, MC, children’s author and video game critic. He’s mostly known for his television presenting work, hosting the weekly ABC video game review shows Good Game (2007-2016), and children’s version Spawn Point (2010-ongoing). During this time, he has become one of the most well-known video game critics and speakers in Australia. He attends conventions and speaks at corporate and public events on a regular basis.

We spoke with Steven as to his latest work in which he co-created and plays the lead BOJO in the Sci-Fi narrative comedy Trip For Biscuits.

1. So Congratulations on Trip for Biscuits – I love what I seen.

Thank you. I’m so excited and very proud of what we have done with creating this and have so enjoyed working this. I just love doing comedy that has catastrophic sci-fi, with fast paced dialogue.

2. Without a doubt you must be a huge Dr Who Fan

I am a huge Doctor Who fan and currently working with Rove as a regular panellist on ‘Whovians’, a talk show about “Doctor Who” and hosted by Rove. I been a sci-fi fan since I was a kid and into to hidden worlds and aliens. I always wanted to make a documentary that was out of space growing up, but with this current work and my other collaborators being the director Dave Cartel, and producer Timothy Powell, we put our creative minds together to make a narrative comedy. As exciting as it is, it had challenges but we had lots of interesting things to learn during the process. I grew up loving shows like The Vampire Slayer, and the Red Broth, along side with the Archer cartoon. They are some of my influences that helped create Trip For Biscuits.

3 Did you do the main part of the writing on this?

I was the writer on this but the director Dave Cartel was probably the main writer where is I came up a lot with the ideas the characters.

4 What was it like being onset and trying to keep it together?

Yeah being onset was a wild experience with the guys and very long days at times. We were very ambitious with ourselves, but it’s funny bouncing through where the dialogue starts jumping between everyone. We got into feeling our characters more so we would crack up and therefore need to take 10 minutes of composure to get back into filming. They were a lot of mad and favourite moments.

5 Was there any main challenges?

There was one day when we encountered a hornets nest. Unfortunately we had disturbed this nest in which case we all got attacked by the bees! That was a difficult day but the crew were great to get us back in order as we had to get back to filming for the day allotment and could not afford to stop.

The cast of actors we have got are all experienced and are wonderful to work with. I’ve learnt a lot from them as to getting tips on learning lines as that was the thing I struggled with in the first two weeks. We just had a lot of fun and they said it was the best fun there ever had on set too.

7 How long did it take you to film the series?

It was filmed in Melbourne and took around 7 weeks. The longer process was 4 1/2 years trying to get it up before then as we came up with the idea we wrote it and then scripted it and did the teaser trailer. We submitted to get money for a pilot and then we saw what worked and didn’t in that pilot. We then took the pilots and got more funding for the scrips and then we managed to get more funding for Series and it’s so rare to go from funding to whole series so we were all excited on this feat alone.

8. Are you looking at the international market to sell you series.

We have made the attempt to sell it on international distribution and it’s all in the works at the moment. We explored the idea of doing shorter episodes which is what kids and early teens like short 10 minute slots to watch. With having done heaps of those shows and making them really short, we still can stitch two three shows together to make a 30 minute show to sell.

9. How did you manage the editing side of things?

We had a couple of editors while we were shooting, and that was good because we were able to see the first few episodes and in the first few weeks of shooting. But it was our director that ended up finishing most of the editing. There is a lot of visual effects in this as well,and for me I had to image a lot of things which was a first time working with CGI and I loved the process of that experience too. Seeing the final product is always fascinating and it sort of blew my mind once I started seeing it all come together in editing. It been one really amazing journey for me and the rest of the team to work with this project.