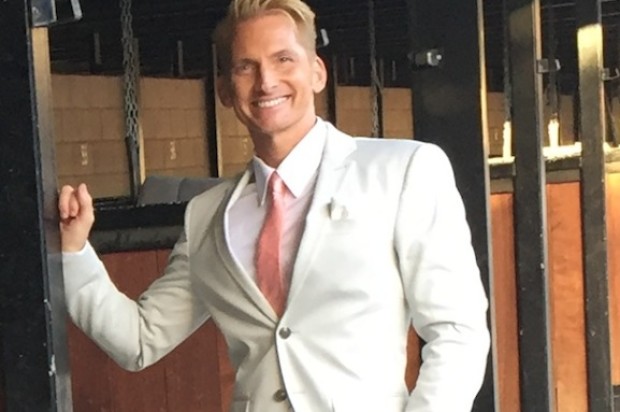 He’s known as ‘Mr Hollywood in Oz’ and the socials king of Queensland and now we throw our spotlight on Damien Anthony Rossi. He’s the man who started out behind the camera in Brisbane 25 years ago as a Casting Director but has ended up squarely in front of it now as a Presenter on Channel 7’s iconic travel and lifestyle program The Great South East. Damien is also the man behind The Sunday Mail’s iconic social pages and is one of Qld’s busiest event hosts. DAR also wears the cap of Ambassador for some of Qld’s most glamorous and exciting events including the Channel 7 Brisbane Winter Racing Carnival, the Noosa Long Weekend Festival and the Mackay Beach Horse Racing Festival. Damien hosts his own biennial Academy Awards night charity event, Rossi’s Oscars, that has raised tens of thousands of dollars for cancer research and charities since its inception in 1995.

How do you start your day? Reading The Courier-Mail over coffee and a bit of breakfast (muesli at the moment!).

What was your first job in Brisbane? After first arriving here in the early 1990’s from Los Angeles, I worked as as a sales assistant at Frendz Menz, a terrific menswear store in the Myer Centre. I did this while I was getting to know the Qld film and TV industry and making contacts to eventually get work as a Casting Director here (which is what I had been doing in LA).

If you were not in entertainment field what else do you think you’d like to do? I spent a short time working in hotels in my early 20’s and I always really enjoyed that. I loved all the comings and goings and the variety of people I would meet. Had I not had ‘showbiz’ in my blood, I think I would have happily stayed in the hotel industry. I always thought being a GM of a hotel seemed a very exciting job.

What do you enjoy doing in your free time or enjoy to do most? No big surprise here – I really enjoy going out on the café scene. Nothing better than a lazy Sunday afternoon with my partner at a cool café in a buzzing area with bottle of wine and some tapas at a great table for people-watching. Of course, I also love going to the cinema. The perfect day for me is to combine both of these – catch a flick and then hang out at one our fave cafés!

If you had a choice to live part time Overseas which country would you choose?
That’s like Sophie’s Choice..very difficult to choose just one! I’d have to say it would be between three of my favourite places: NYC, Rome and the Greek Islands.

What is your favourite food?
I’d say at the moment it would be French, Indian and Thai.

If you were to invite 6 famous people to dinner who would they be?
Oprah Winfrey, George Clooney, Hugh Jackman, Prince Harry, Cher and Bert Newton (one of the nicest and funniest people I’ve ever met in my entire life. I actually spent the Brisbane Floods of 2011 with him!)

Are there things on your bucket list that you’d like to do in the next year or two? What are they?
Well, the Noosa Long Weekend Festival was originally going to have me jump out of a plane and skydive down to Noosa Beach to officially open the festival on opening night (Friday, 15 July) but unfortunately, they couldn’t get clearance on the jump due to the fact it was going to be after dark. I’d always said I’d never skydive but I thought to myself “How many times do you get the opportunity to jump out of a plane down onto Noosa Beach to open a fantastic international arts festival?” so I had agreed and had started to really look forward to the jump. I really psyched myself into it. So I was pretty disappointed when I found out it wasn’t going to be possible. So now I’m ready to jump (I’ve been praticing my landing)!

What type of films do you enjoy most? I love a good psychological thriller – a film like The Silence of the Lambs tickes all boxes for me. I alos really love Woody Allen films – especially his work in the 1980’s and 90’s. And it may be a chick flick, but man I though Bridesmaids was friggin’ hysterical! (Look away!!)

If there is one piece of advice you would give to others about life, what would that be?
Go after your dreams! It may sound cliché but we have so little time in the scheme of things that, why not go after your dreams? After all, this isn’t a dress rehearsal, the curtain has risen and you’re on stage – make the most of it before that curtain comes down! Another thing I am big on saying is that perseverance is EVERYTHING! It’s the difference between those who have realised their dreams and those who never do.

Damien will be up at the Noosa Long Weekend Festival starting this Friday, 15 July and running until Sunday, 24 July. Damien is this year Festival Ambassador and will be up in Noosa for the whole 10-day festival.
The program is full of entertainment and fun things to do. For view the full 2016 program go to http://www.noosalongweekend.com