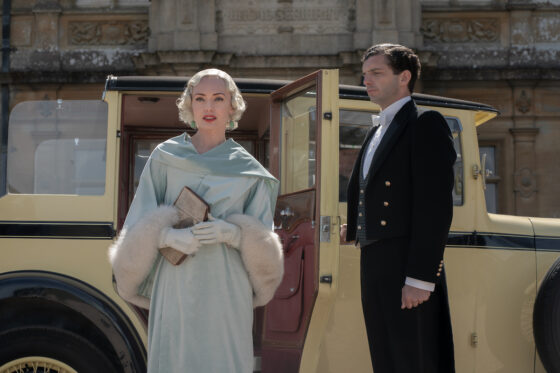 Laura Carmichael is most widely known for her performance as Lady Edith Crawley Downton Abbey. She has appeared in films like Tinker Tailor Soldier Spy, Madame Bovary and A United Kingdom while her other TV work includes the series Marcella. She has starred in a number of theatre productions, making her West End debut in Uncle Vanya. She returns as Edith Crawley in the second Downton film, Downton Abbey: A New Era…

Does it feel very natural to slip into the character of Lady Edith again?

The first day I am going, ‘Is this right? Is this what I normally do,’ when I’m holding a teacup or whatever but it is funny because you just get into it very quickly and it is very familiar. I love it. It is a great fun thing and it’s a gift to slip in and out of it so naturally.

What kind of feelings do you get when you return to Highclere each time?

Every time we go up that driveway it feels like a gift. When we finished the final season Michelle [Dockery, Lady Mary] and I went walking round the grounds and we were crying. We really love it and it is the backdrop to so many happy memories, so it does feel really special.

Both you and Michelle have grown up alongside the characters you play; that must be very rewarding?

It is an amazing thing and we are always emotional about this job because it has been so much a part of our lives, and it has given us so much. It has opened a lot of doors and taught us so much. I feel that I have learnt so much from watching the best and you carry that forward into all your other jobs.

How much do you enjoy the fact that your character is keen to work rather than just being a lady of leisure?

I love that. I think it is so cool and it is a real gift of the series that she evolved and became this working woman. I would be really sad if she let that go and I think that Julian [Fellowes] thought that and the audience felt that, too. Bertie [Lord Hexham, Harry Hadden-Paton] and Cora [Lady Grantham, Elizabeth McGovern] encourage her to keep writing. I think that is how it happened in the First World War; living through it, women came out of the other side of it having taken on a lot of the jobs and they didn’t want to go back to just worrying about what outfits they were going to change into. That was really clear watching Edith and Mary, who has really taken on the running of the house. Everyone is aware when you see her in the scenes with Maggie [Smith, Countess of Grantham] that there was something that the women were doing. They are making no secret about it anymore.

How has Edith’s style has evolved, particularly as Downton heads towards the 1930s and visits a foreign location?

Costume is so much a part of this show and a part of the storytelling and Anna Robbins [costume designer] has done amazing job with this film. Going to the south of France gave her opportunities to do things that she couldn’t do at Highclere and we were always very interested that hemlines were coming up and getting into that flapper dress that we all recognize as a 1920s style. For the aristocracy that is a bit risqué, and certainly in the last film with the Royal Family you would never wear something so short in front of the King and Queen. But here in the south of France we get to lean into the new fashions and new trends that were coming from Paris and we see them in their relaxed holiday mode. Edith gets the best outfits. She gets very cool and she gets to wear trousers and tennis whites. We had so much fun with the tennis outfits.

You are walking in tennis gear on screen but did you get to play in those outfits?

No, and thank god because I have no hand-eye coordination! It would have been a hilarious scene. We look like we’re about to be really good at it. One of us is wearing our heels, which is very funny.

What else do you think the French Riviera section brings to the movie?

It really brings freshness and you see these characters in a different context with the looseness of being away from the house. Also, the different vibe gives Robert the chance to be really emotional. I think that is no mistake that that happens in France. I think that the viewers will love seeing it and it’s an enticing advert for the south of France. It looks so good because it was so good. It was heaven. That bit overlooking the sea was just extraordinary.

Your character mentions the likes of Coco Chanel and Zelda, so did you learn much about the glamour of that place during that period?

Throughout the scenes we were always warned against getting any suntan because these characters would never hang outside. They didn’t holiday. They did not hang out side; that was not the look. But this is when it happened. This is when the big partygoers of the 1920s were vacationing in the south of France and were making it very fashionable and glamorous. I feel like viewers would want to go and look it up but it was really amazing. Julian is so smart to tell that story of Edith being interested in it, and to share that glimpse into her world imagining the articles that she is going to write. He is able to tell so many stories so economically in these glimpses of what is going on with Edith. You know what kind of writer she is. You know what that magazine looks like because of those moments.

Simon is so brilliant and we were very lucky to have him. We have known him for years as Elizabeth [McGovern]’s husband. He in a way knows the show better than anyone else. He is amazing and has been so supportive through the years. We have known him as this big film director. So the fact that we were able to get him for our movie is so great and he really gets it and knows the tone. He is able to change things in a way and bring freshness. I don’t think that Downton has ever looked as good as it looks here and [director of photography] Andrew Dunn, who worked on Gosford Park, is no stranger to this world so it just looks fantastic. And to keep all of those stories threaded through, and those unscripted moments, is amazing. The final sequence is so stunning and I added some dialogue. I think I added sniffs and sobs and was absolutely in bits. Are you free to add little bits of dialogue here and there?

I guess we are offering and I think in those moments you know the character so well and you are in the moment. Simon is very responsive to that but he also had a very clear vision. He was really direct and he had fantastic notes and yes, super ready to go and I loved that. It felt a very efficient set.

How was shooting that emotional scene with Maggie Smith towards the end of the movie?

I think Simon was aware in rehearsal that Michelle and I couldn’t really look at each other. Even when I think about it now I well up. So he was like, ‘We will start the coverage with Michelle and Laura otherwise they will be hysterical! We will just do the first take and then we can move on,’ so it was really special. It is a privilege to work on stuff like that and to feel that way and to get those scenes. On Maggie’s last day of filming there was a sort of parade and everyone clapped her out. It was really, really special and we were very lucky.

What is another treasured memory from making this film?

There are so many, but France was extraordinary and there was a moment where Simon wanted us to see Day for Night, which is a film about making a film in the south of France with Nathalie Baye and we had a screen brought down and we sat outside in Nice at this incredible hotel watching the film I have pictures of us all taken from my balcony.