SPOTLIGHT WITH SHARI SEBENS ON NEW ABC SERIES THE HEIGHTS

ABC new TV Drama series The Heights stars actress Shari Sebens who is our Spotlight as to her role in the new exciting series coming out 22nd February.

How did you get the part of Leanne ?

I was actually doing a development project with Debra Mailman, and the audition came through and I asked Deborah if she could be my reader for the self tape, and we filmed it sent it off and it was in about five days later that I was told I had the role with then having about three weeks after that to get ready to go to Perth for the shot.

Tell us about your character that you play in the Heights?

Leone is a successful career woman who is a single parent, but has a highly functioning relationship with her ex-husband. Her character is one that takes prides on herself to be able to have a amicable family with open communication, which is important to her to keep balance in all she does as that is the challenge she faces in the series to keep it all in control.

What was the duration of the filming
We were in Perth for four and half months but four weeks of that was rehearsal which is kind of unheard-of in Australian film and television. Normally you only get about it a week rehearsal.

Tell us more about how that all works?
It was the decision more on the producers who were pretty adamant about wanting a bunch of people who basically had never met before, as first time actors, which turned out to be really quite a bit of fun for us all, as we had the time to really get to know each other and bond well with doing a lot of rehearsals.

Can you share a little bit more about your role with Marcus Graham?

What is the most interesting in developing this relationship in this series is my role with Marcus Graham, who is Pav, and potential we have a good relationship in co parenting, but as a woman interest comes in for “Pav” it’s a really good dynamic to play out in which his love interest works in a positive way.
Normally in series drama it can go the other way, but its actually refreshing as the writers and produces decided that a bond of friendship that develops between the women instead of having the usual jealousy aspect made it more appealing to be more positive building for the series. It makes you feel comfortable with the storytelling and thought it was really nice and more real way to act this out.

With it coming to air how long do you expect to hear if there will be second season.

Oh yes we’re just waiting with baited breath to see how the Australian audiences react to it. We would all love to come back and do a second series as I fell in love with the character of Leonie and the world we created. We would love to bring more of it to Australian audiences. I think it’s the type of show that the audiences would love as it is pretty real has a wholesome feeling wiht respectful with boast of fun.

What is it that you’re watching right now or binging ?

I watch a TV series called Pose which I am obsessed with, Mystery road looking forward to seeing what series two brings. I like to unwind with TV shows and surf what good.

I have feature film Top End Wedding coming out soon where I play Maranda Tapsell bridesmaid in which I played in her real wedding last year in December. It was like life imitating life, really funny how that all worked out.

This film could be the first indigenous romp com to come to our screens it’s super exciting because it’s just so sweet, lovely and funny as well as heartwarming in its story.

Yes it is! and its just fantastic because as we go back to starting with the “The Sapphires” and we all stay in touch because of the indigenous projects that come up, and we actually create a good shorthand to communicate.

Who inspires you the most in your life

My mum because when I think I’ve got it hard I just go back and think of my mum and how she raised us and what she contributes to us as to family of six. Very inspiring women who does amazing work.

ABC new TV Drama series The Heights will commence on February 22nd 8.30pm and then can be seen in Iview. 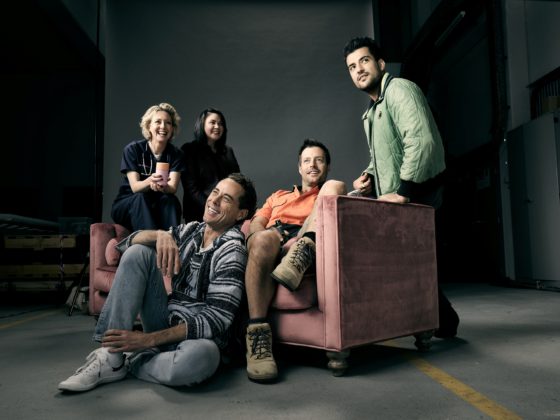