STEPHEN CARLETON AND PAUL HODGE TALK ON THE CREATION FOR: JOH FOR PM 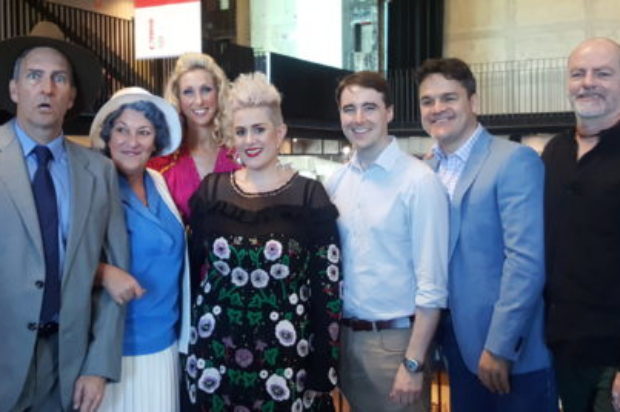 Joh for PM is a comedic flashback to the ‘80s but the strong political themes of the play still resonate in modern Queensland today.

With a sneak preview of what’s yet to become a smash hit that kick-starts the Queensland Music Festival tonight, “Joh for PM” is a political satire musical that embellishes the life and career of Joh Bjelke-Petersen and his wife, Flo.

Australian actor Colin Lane plays the titular character and has completely immersed himself in the role of Joh and is quick to the wit when you do speak with him. Flo is played brilliantly by Queensland favourite theatre actress Barb Lowing who perfects the role of Flo ever so well. Together they form a formidable team that will leave audiences to fall out of their seats in laughter.

We sat down with the writer Stephen Carleton, and composer Paul Hodge, to talk on this yet charming production that opens up tonight for the Queensland Music Festival.

Why do you believe this satirical musical is relevant to the socio-political climate today?

(Stephen Carleton): It’s a 20-year chapter in history and it is important particularly for young generations to understand Joh’s Queensland and to get their heads around how we inherited it. I think Joh’s legacy continues to haunt the state in all sorts of ways, and to resonate with us today. There are a couple of obvious parallels and connections; Campbell Newman for example, 10-years as premier. Not worrying about how things are done, just have to get things done. Joh’s ghost very much reared its head in Newman’s reign. And now today we have Donald Trump and Pauline Hanson trying to make themselves felt on this international stage. There are people like Cory Bernardi in South Australia who sees Joh as a hero. Clive Palmer names Joh as one of his idols and political mentors. Joh’s shadow still looms larger and his presence is felt everywhere in a way. During turbulent and difficult economic and social times, sometimes large parts of the electorate turns to populists, they turn to politicians who promise easy answers and easy solutions to complex problems.

You mentioned that Joh’s legacy was a bit haunted and ghost-like. Do you feel like this will be very similar to Trump, because we might feel the repercussions for generations to come?

(Stephen Carleton): Absolutely. I think he will be someone who will be looked back on as a game changer for many decades. It will be like “remember that period when we elected that ‘wacko’?”. It is an extreme example to draw but it’s similar in ways, but it is that mindset that we have of how can we elect such a man? Yet, Joh had lots of fans; there are still people today who do not universally regard him as a terrible figure. He polarised and split people. There are still people from your parents and grandparents’ generation who view Joh as the moderniser of Queensland. The man who brought Queensland’s economy to the 20th century.

What made you want to create a political satire of this particular Premier?

(Paul Hodge): I think he’s the biggest, the most spectacular, and also the longest serving. Joh was the biggest as in that he had international impact. He was involved with Goth Whitlam’s dismissal as Prime Minister. All the other Prime Minister’s had issues with Joh such as Frazer and Hawk. And also, Joh was the only Queensland Premier to run for Prime Minister, which is slightly ludicrous. I think he wasn’t just on a Queensland level with his insane personality, but the whole nation looked on as he made this doomed run to being Prime Minister: ‘Queensland’s gift to the nation’.

Who was your target audience in this musical, and why do you think it would be relevant to them?

(Stephen Carleton): The target audience is a broad one. In the first place, obviously we wanted the piece to connect with the generations who lived through this time period. There are a lot of different people’s stories to tell which has made it hard for us to summarise in a 2-hour show. In the first instance, I think it was important to honour and speak to the people who endured Joh’s leadership. Today’s audience, the broadest possible audience, we are aiming for. Young generations who we feel have a danger of forgetting this part of Queensland’s history; Joh and our political past. We operate in the phrase that keeps getting used about the internet where we function in this echo chamber of only speaking to ourselves; Facebook for example. We all need to know about Joh’s political leadership which has shaped Australian history, especially how he has changed how the rest of the nation regards Queensland.

Is this kind of drawing a parallel of that was what we were like, and this is what we are now. Is this musical a forewarning to not turn back to this, as in the case of America with Trump now.

(Stephen Carleton): I think that is sitting there in an unstated way. We are not being didactic about that way but I think you are right to say that the question hangs there.

(Paul Hodge): People are more likely to take on this satire if it is delivered in the package of fun.

What impressions do you want to leave behind on audiences with this musical?

(Stephen Carleton): There is a sense of relief of a bullet dodged and a way of measuring us then and now, and also providing an opportunity for audiences to ask how much has changed and what has changed in Joh’s reign.

(Paul Hodge): I assume there will be things where people will go, “did that really happen?”, and then go and research what they have heard. I think it would be interesting for people to go away and do that. From a composer’s perspective, I hope they go away humming the tunes. 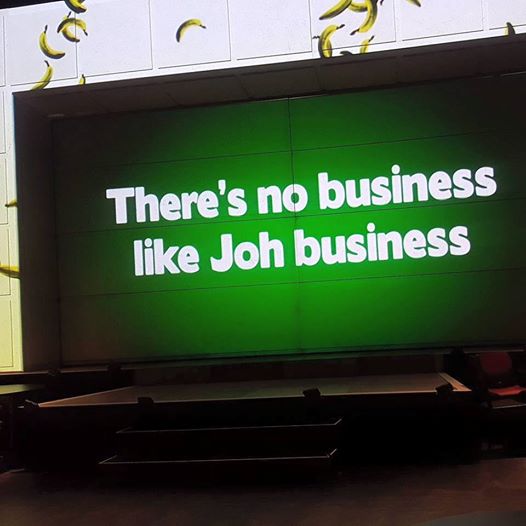 We noticed that you made use of the banana within your signage and also on stage, is there a significance with that chosen symbolism? For example, we could make connections with the pineapple and the sunshine state, A.K.A. Queensland.

(Stephen Carleton): Bananas and pineapples are symbols of trashy Queenslanders. The pineapple was a short-hand symbol of Queensland and the banana is linked with the phrase ‘banana republic’.

(Paul Hodge): Banana also tends to symbolise ‘banana benders’ and making the statement that Joh is slightly ‘bananas’/crazy. Banana to me immediately says comedy; it is as though you have been slipping on a banana peel.

(Stephen Carleton): This is establishing a tone of pitch. It is signalling to the audience that we are here to have fun as well.

Why did you choose to go specifically to the past to make the social commentary on our current political environment when there is so much source material right now: Trump, Hanson, or perhaps Abbott could be argued as another?

(Stephen Carleton): It is this sense, as Paul said earlier, that Joh was this huge figure in Queensland politics. He was the Premier for 20 years. He reigned over the most famously corrupt Queensland Government. He was this constant touchstone. Even though this was in the past, this is still resonating into the present now.

(Paul Hodge): I think when the project started, what is happening in the world now had not emerged or affected our script. Even when Stephen had done the first draft and when we started working on it last year, Trump was still running in the primary but he had not won the Presidency. We assumed he wasn’t going to. Hanson hadn’t won her seat yet either. All of these things kind of became a zeitgeist.

Do you have plans to create another satirical musical after Joh for PM?

(Stephen Carleton): We will have to wait and see how this one goes but Paul and myself have worked together very well. It has been a really fruitful collaboration and we would be keen to work together again. We will see how this goes and the wider response it receives.

Jo for PM runs and is presented by Brisbane Powershouse July 7th to 16th part of the QLD MUSIC FESTIVAL and Jute Theatre Company.
https://qmf.org.au/joh-for-pm/