Strictly Ballroom is on its way to Melbourne and to celebrate new tickets for this highly anticipated Melbourne Premiere will go on sale on Monday 6th October.

STRICTLY BALLROOM THE MUSICAL had its Global Premiere on Saturday 12 April at the Sydney Lyric Theatre, The Star where it is currently playing.

“A spectacular, eye popping musical, brought to life in all its sequined glory” and ‘ A dazzling feast for the eye – absolutely sensational!’ The Sunday Telegraph. 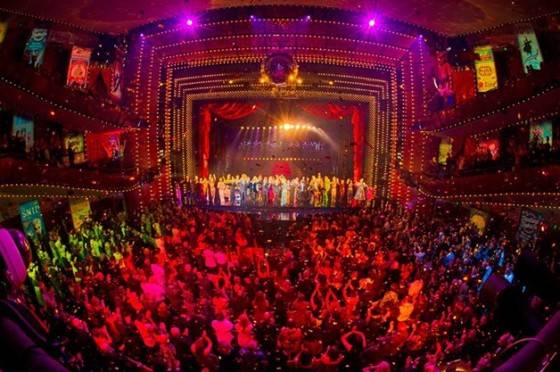 Playing the pivotal roles of ‘Scott Hastings’ and ‘Fran’ is Thomas Lacey and Phoebe Panaretos who lead an outstanding Australian cast of 43 including Bob Baines as Les Kendall, Drew Forsythe as Doug Hastings, Natalie Gamsu as Abuela, Robert Grubb as Barry Fife, Fernando Mira as Rico,Heather Mitchell as Shirley Hastings and Mark Owen-Taylor as JJ Silvers.

STRICTLY BALLROOM THE MUSICAL is the inspiring story of a championship ballroom dancer who defies all the rules to follow his heart. This uplifting and courageous tale originated as a stage play that Baz Luhrmann devised with a group of students at the National Institute of Dramatic Art (NIDA) back in 1984.

STRICTLY BALLROOM THE MUSICAL features break-into-song numbers created from original classics from the film, Love is in the Air, Perhaps Perhaps Perhaps, and Time After Time as well as some wonderful new songs by artists such as Eddie Perfect and Sia.

STRICTLY BALLROOM THE MUSICAL is produced in Australia by Global Creatures and Bazmark.