STANDING OVATION: THE GREATEST SONGS FROM THE STAGE, RELEASED FRIDAY 16TH NOVEMBER 2012, ‘THE WINNER TAKES IT ALL’ & ‘SOMEWHERE OVER THE RAINBOW’

TO RADIO THIS WEEK

Singing sensation Susan Boyle returns with her fourth studio album in three years, a stunning album of songs from the golden era of film and stage. STANDING OVATION: THE GREATEST SONGS FROM THE STAGE, out Friday November 16th, sees Susan Boyle and world acclaimed producer Biff Stannard join forces to present a sensational album that will span the generations. 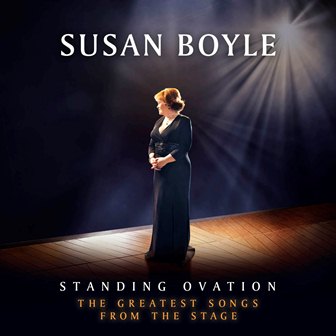 The album heralds a return to an era of much loved music for Susan Boyle, a lifelong fan of musicals.  Her favourite songs from the golden age of film and theatre fused with her outstanding vocals from the ethereal to the dramatic, the music showcases the voice the world fell in love with.

Talking about her album Susan said; “I have been a fan of musicals since I was a wee girl. I love them and have enjoyed the drama and the range of emotions they inspire in you. I still remember the first time I saw Les Mis, my all time favourite. I fell in love with it and have seen it now countless times as each time you watch it you draw something different.

Creating this album was a joy and came very naturally as I knew the songs and could identify with the characters in the studio. Recording with Donny on two songs was a dream come true. Working with him was awesome and I learned so much from him as a performer and a person. Being in the studio with him was without doubt the best day ever- it wasn’t work!”

Featuring breathtaking renditions of Send in the Clowns and Bring Him Home, Susan also fearlessly takes on the iconic song Somewhere Over The Rainbow giving it a new identity.  The Winner Takes It All and Somewhere Over the Rainbowwill both be serviced to Australian Radio this week. 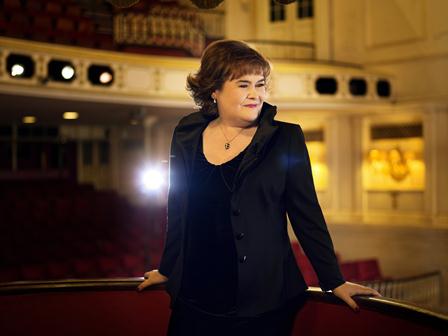 Donny Osmond said; “I remember watching Susan’s debut on Britain’s Got Talent. I had the same reaction Simon Cowelland the rest of the world had. Susan has the voice of an angel; I consider it an honor that she asked me to be featured on her album.

STANDING OVATION was produced by Biff Stannard in Glasgow and London. Stannard is a highly regarded producer who in the past has worked with Kylie Minogue, U2, Westlife and One Direction to name a few.

Fans can listen to a preview of the album by heading here – http://www.youtube.com/watch?v=eQZKVnl_h2g&feature=youtu.be

In other exciting news, the new musical based on the life story of the global singing sensation Susan Boyle, starring UK actress Elaine C Smith in the title role, will run for limited seasons next year in Melbourne at Her Majesty’s Theatre from May 31 and in Sydney at The Theatre Royal from July 4.

Tickets will go on sale on Monday 26 November.

The musical tells the story of Susan Boyle’s life, from her birth…and the hand which life dealt her…up to the present day. From her humble beginnings of being born into a large working class family, and sharing a three-bedroomed council house with a family of ten…to where she is today – a global star and an inspiration to millions – a woman who beat the odds and changed the way the world looked at people.

I Dreamed a Dream takes the audience through the experiences which have made Susan the woman she has become; the pain of lost love, the heart-breaking tragedy and loss of the anchors in her life, and being cut adrift in a lonely, threatening world, then finding strength and solace in her faith, to the life changing experience of Britain’s Got Talent.

An orchestra, a multi-talented cast, and cutting edge multimedia technology, along with many of the well-known songs from Susan’s record-breaking albums, will take audiences on Susan’s journey for what promises to be a magical theatrical experience.

Known best for her element of surprise and a powerful and heart stopping voice, Susan has become a global top selling artist. The phenomenal album sales, record breaking achievements and multi platinum chart domination- Susan has come a long way from the Britain’s Got Talent stage in 2009.

To date her previous three albums, I DREAMED A DREAM, THE GIFT and SOMEONE TO WATCH OVER ME have sold over 18 million copies and stormed to the top of the charts in over 30 countries. In Australia, Susan Boyle’s I DREAMED A DREAMis currently 10 x platinum and was the #1 selling album of 2009, THE GIFT is triple platinum, and SOMEONE TO WATCH OVER ME is double platinum. She has sold over 1 million units in Australia alone.

ALBUM – STANDING OVATION: THE GREATEST SONGS FROM THE STAGE –