THE ACADEMY HAS SPOKEN WILL SMITH IS BANNED FOR TEN YEARS

banned HOLLYWOOD ACTORS the slap will smith by Caroline Russo | on April 8, 2022 | 0 comments | in Entertainment | Like it 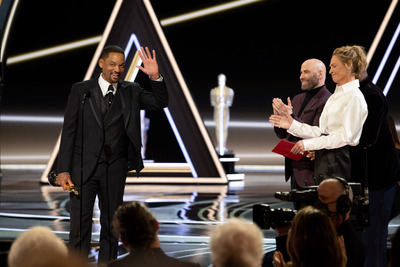 The Academy has released a statement following the verdict of Will Smith at the Oscars as reported from The Wrap today.

Will Smith has been barred from the Oscars for 10 years as a consequence of him slapping presenter Chris Rock during the Oscars ceremony last month, the Motion Picture Academy ruled Friday.

The Academy’s Board of Governors also accepted the actor’s resignation as a member. However, the board did not rule Smith ineligible to receive nominations — or Oscars.

“This action we are taking today in response to Will Smith’s behavior is a step toward a larger goal of protecting the safety of our performers and guests, and restoring trust in the Academy,” the Academy said Friday in a statement. “We also hope this can begin a time of healing and restoration for all involved and impacted.”

“During our telecast, we did not adequately address the situation in the room,” the Academy’s statement said. “For this, we are sorry. This was an opportunity for us to set an example for our guests, viewers and our Academy family around the world, and we fell short — unprepared for the unprecedented.”

Shortly after the Academy’s ruling, Smith released a brief statement via his spokesperson and said, “I accept and respect the Academy’s decision.”

The governors first met on March 30, with the Academy releasing a statement that said Smith had been asked to leave the ceremony but “refused,” and delivered their ruling in which they voted to discipline Smith as part of its previously announced “formal review” into the incident.

The consequences are in line with the Academy’s Bylaws and Standards of Conduct, which were revised in late 2017 in the wake of the #MeToo movement. The standards outline what is deemed as “unacceptable conduct” for members — including “physical contact that is uninvited” — and lists all the potential forms of discipline Smith could have faced for this unprecedented incident in Oscars history.

Only five people have been expelled in the history of the Academy. Harvey Weinstein, Bill Cosby and Roman Polanski were all expelled in connection with convictions for sexual-abuse charges. Actor Carmine Caridi was expelled in 2004 for loaning VHS screeners to a friend who was caught by the FBI using the screeners to make pirated copies of films. And cinematographer Adam Kimmel had his membership revoked in 2021 for failing to disclose that he was a registered sex offender.

The Academy also stopped short of revoking Will Smith’s Oscar won for “King Richard,” something that actors branch governor Whoopi Goldberg alluded to on “The View” following the Oscars. Only one Oscar has ever been revoked, and not for reasons connected to personal conduct. That was in 1969 when the year’s winner for Best Documentary Feature, a film called “Young Americans,” was disqualified because it was actually released in the year prior to when it was submitted for eligibility.

Others have had their privileges to be considered for the Oscars temporarily or permanently revoked. Bruce Broughton, a songwriter who in 2014 was nominated for “Alone Yet Not Alone,” had the song’s nomination revoked after it was found he had improperly contacted other branch members in support of his original song submission. What’s more, people or companies have had tickets to the Oscars ceremony revoked as a result of campaign violations.

The previous year’s winner for Best Actor traditionally is asked to present the following year’s prize for Best Actress. Smith was also considered an Oscar contender for “Emancipation,” a runaway slave drama directed by Antoine Fuqua and scheduled to be released by Apple later this year.

The “King Richard” star during the Oscars last month walked onto the stage and slapped Rock after the comedian joked that Smith’s wife, Jada Pinkett Smith, who has alopecia, should star in a “G.I. Jane” sequel due to her closely shaved head. He then twice shouted from his seat, “Keep my wife’s name out your f—ing mouth.”

Following his apology to the Academy during his Best Actor acceptance speech, he apologized directly to Chris Rock and condemned his own actions as wrong.

See the Academy’s full statement from Friday below:

The 94th Oscars were meant to be a celebration of the many individuals in our community who did incredible work this past year; however, those moments were overshadowed by the unacceptable and harmful behavior we saw Mr. Smith exhibit on stage.

During our telecast, we did not adequately address the situation in the room. For this, we are sorry. This was an opportunity for us to set an example for our guests, viewers and our Academy family around the world, and we fell short — unprepared for the unprecedented.

Today, the Board of Governors convened a meeting to discuss how best to respond to Will Smith’s actions at the Oscars, in addition to accepting his resignation. The Board has decided, for a period of 10 years from April 8, 2022, Mr. Smith shall not be permitted to attend any Academy events or programs, in person or virtually, including but not limited to the Academy Awards.

We want to express our deep gratitude to Mr. Rock for maintaining his composure under extraordinary circumstances. We also want to thank our hosts, nominees, presenters and winners for their poise and grace during our telecast.

This action we are taking today in response to Will Smith’s behavior is a step toward a larger goal of protecting the safety of our performers and guests, and restoring trust in the Academy. We also hope this can begin a time of healing and restoration for all involved and impacted.

Credits Images to The Academy