The Arts Centre Gold Coast :Swing on This 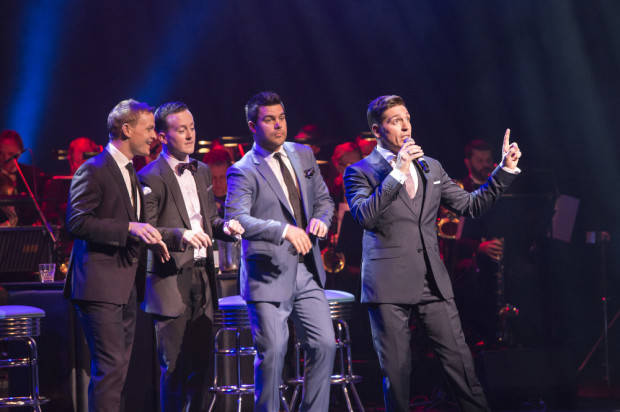 Charm personified in a cocktail of swing…

Starring some of Australia’s leading stage talents – Michael Falzon, Matt Lee, Luke Kennedy and Ben Mingay, Swing on This delivers a modern, audacious take on some of the all-time swing classics along with ‘well-swung’ interpretations of rock and pop songs that have defined the last four decades.

Michael Falzon is an Australian actor, singer & songwriter. Michaels breakthrough role came in 2003 when he was hand-picked by Queen’s Brian May & Roger Taylor to star as Galileo in We Will Rock You. Since then, amongst Michael’s international cabaret, film and concert credits, he has appeared in the penultimate season of Blue Heelers, Sydney Theatre Company’s The Wharf Revue and recorded his first album.

Matt Lee is a leading Australian theatre and dance personality who has starred in some of Australia’s favourite television and stage shows.
Matt performed as Bert in Mary Poppins, winning the 2011 Helpmann Award for ‘Best Male Actor in a Musical’. His stage credits include major roles in Miss Saigon, We Will Rock You, Hugh Jackman’s The Boy from Oz, Rent, The Witches Of Eastwick, Oh What A Night, Grease, Dein Perry’s Steel City, Hot Shoe Shuffle and the Opera Australia production of Rags. Matt was a permanent member of the judging panel as well as choreographer on So You Think You Can Dance for Network Ten, which earned him a 2009 Logie Nomination for ‘Most Popular New Talent’.

Luke Kennedy is a versatile performer and recording artist who recently became the runner-up of international television phenomenon The Voice Australia – Season 2. Luke’s appearances on the show led to him becoming the first artist to score a number one single on the iTunes charts with his version of ‘Time To Say Goodbye’. Prior to appearing on The Voice, Luke had extensive touring experience with The Ten Tenors.

Ben Mingay is an actor, musician and international musical theatre performer. He began as a rocker from Newcastle, who divided his time between the construction site and the conservatorium of music. He is currently appearing in the Channel 10 drama series Wonderland, playing the role of Rob Duffy. In 2013 Ben performed as a featured artist for Room 8’s spectacular Songs of James Bond.
Ben played the role of Buz in the final season of Packed to the Rafters and starred in the world premiere production of An Officer and A Gentleman, following a Sydney season in the award winning musical Jersey Boys in the role of Tommy DeVito. In 2004, Ben originated the role of Billy Kostecki in the world premiere production of Dirty Dancing at Sydney’s Theatre Royal for Jacobsen Entertainment. He has since performed in every English-speaking production of Dirty Dancing.

STOP PRESS – Currently The Arts Centre Gold Coast is casting four to six amazingly talented local tap dancers to join the cast. This is a fantastic opportunity for locals to be mentored by Choreographer Chris Horsey and ‘Mr Song and Dance’ Matt Lee.

Featuring a full 18-piece big band, your toes will be tapping to the sophisticated sounds of the fifties through to the nineties and noughties.