ANYTHING GOES STAR GERRY CONNOLLY REVISITS AS THE QUEEN WITH HER CORGI’ AT THE EKKA! 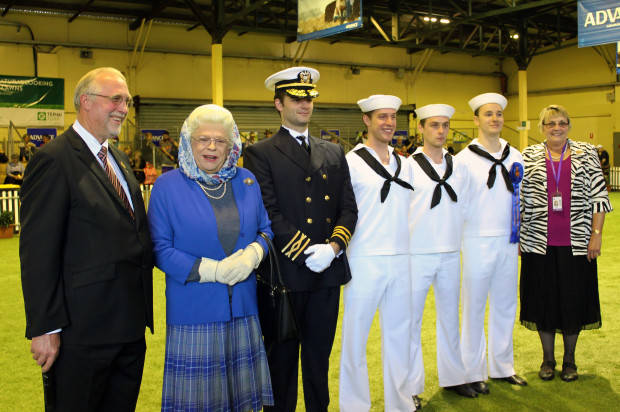 Gerry Connolly, currently starring in Anything Goes at the Queensland Performing Arts Centre (QPAC), delighted Ekka patrons today as he took on the role of Queen Elizabeth II.

“The Queen” payed a surprise visit to The Ekka this afternoon, taking one of her prized Cardigan Corgi puppies to the Dog Pavilion.

The visit kicks off the closing week of the hilarious Helpmann Award winning musical Anything Goes which officially closes Sunday 16 August 2015.

Anything Goes sees Connolly’s return to leading Australian Producer John Frost’s fold, playing the Captain of the S.S. American. His last Frost appearance was with the comedic portrayal of Marcus Lycus in A Funny Thing Happened on the Way to the Forum in 2012/2013.

Connolly is an accomplished Australian comedian, actor, impressionist and pianist best known for his satirical caricatures of public figures. For half the reign of the present Queen, he has performed as Her Majesty in the Southern Hemisphere and occasionally north of the Equator. This turn began life at the Queensland Conservatorium of Music in revue in 1981, and along with his rendition of Sir Joh Bjelke Petersen quickly became the basis of stage shows such as Men and Women of Australia, I CONnolly, Gerrymander Joh and the Last Crusade, Different Things and Pianomaniac.

For decades, Anything Goes has captivated millions with its delightful story of madcap antics aboard the S.S. American. Winner of three 2015 Helpmann Awards, including Best Female Actor, Best Male Actor in a Supporting Role, and Best Choreography in a Musical during its Australian season, Anything Goes is a stunning nautical favourite. This is a first-class musical.

Don’t miss Anything Goes before it sets sail with the last performance in Brisbane on Sunday 16 August 2015. To book go to qpac.com.au or phone 136 246.

Image from left RNA Councillor in charge of the Dog judging, Lionel Blumel, The Queen (Gerry Connolly), and Captain and Sailors from The SS American.