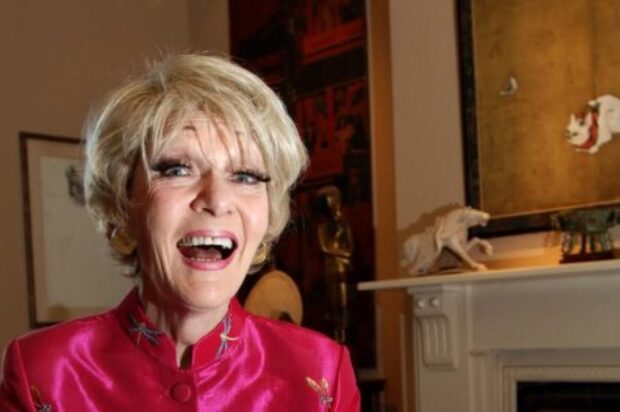 Jeanne Little was the darling personality you never forget her as she was large as life and was a regular hit on Australian daytime television, in the ’70s as a guest showcasing designer maternity clothes, on first network Ten The Mike Walsh Show, then eventually (after a stint at Channel Seven) moving with the Walsh Show to Channel Nine.

For over 15 years she was made the audience laugh with her, and everyone loved her from Ray Martin who have her as a guest and even went on BBC’s Michael Parkinson variety show that is was said she so startled London critics she had the London Evening News saying: “What a woman! With her, in the house, you wouldn’t want a TV.” Among the overseas guests she appeared with are US actor/comedians Phyllis Diller and George Burns, and British theatre actor Danny La Rue.

In 1976 Little won a Gold Logie for most popular television personality and subsequently won two other Logies for her work on the Mike Walsh Show. She performed at the Royal Command Bicentennial Concert before the Prince and Princess of Wales. Her stage career took off with Jerry’s Girls, in which American director John Frost teamed Little with well-known entertainers Marcia Hines, Debra Byrne and Judi Connelli. She then subsequently appeared in Legends with Kerrie Biddell, Toni Lamond, and Nancye Hayes at the Sydney Opera House.

She appeared in theatre since 1978, including Marlene, Little’s one-woman tribute to actress and singer Marlene Dietrich, which toured Australia and the US to critical acclaim, followed by More of a Little, which was filled with songs, chat, and anecdotes, as well as A Tribute to Marilyn Monroe.

In the late 1990s, through to the mid-2000s, Little appeared on the panel discussion show Beauty and the Beast, with beast Stan Zemanek.

In February 2011, her daughter Kate announced Little was suffering from Alzheimer’s Disease, which was initially diagnosed in 2009. In August 2014, family members advised that Little’s illness had advanced to the stage that she “no longer knows where she is or what’s going on around her”.

Kate did a social media announcement of her mother passing.

Entertainer Jeanne Little has died at the age of 82.

“My mother has left the earthly plane,” she posted on Facebook.

“This is a huge shock – but I’m so grateful.

“Love you all my friends.”

Little’s daughter created the Jeanne Little Alzheimer’s Research Fund in 2011 after the Australian icon and television darling of more than 30 years was diagnosed with the disease in 2009.