Touch Of Disney Films to Treat the Family.
Today we the Caulﬁeld family clan, Jayden, Cameron and our little sister kaylea went to see ‘Beauty and the Beast’ 3D at Event Cinema, Garden City. When we arrived, there was a great art and craft area set up for all the little girls and boys to make crowns and get face painted orgainezed by the Events Cinema with Disney for a first run of Disney Film Festival. I have to admit that Jayden and myself Cam, sat back with our heads down trying to avoid detection while our sister kaylea created her own crown and wand. Our attempt at looking inconspicuous failed when we entered the cinema then we got some strange looks from the parents walking in there little boys and girls to the ﬁlm. O well… The movie was great for younger audiences therefor kaylea loved it and would recommend it to all the little princes and princesses. ‘Beauty and the Beast’ starred
‘Robby Benson’ as the Beast, ‘Paige O’hara’ as Belle, ‘Richard White’ as Gaston, ‘Jerry Orbach’ as lumiere, and ‘David Ogden Stiers’ as cogsworth. Belle, whose father is imprisoned by the Beast, offers herself instead and discovers her captor to be an enchanted prince. The 3D was really great, it felt like you could reach out and grab things. The Film Festival has lots of other treats as you see below and this is great value for everyone that loves to relive the world of some of the best films that Disney have made over the years. 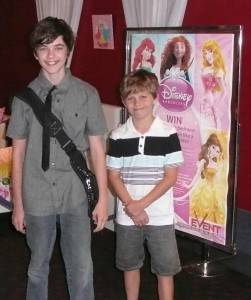 We asked Kaylea, to give us the stars on Beauty And The Beast and she rated it at 4 stars.
Over and out from the Caulfield’s Kids Korner.

ABOUT THE DISNEY PRINCESS FILM FESTIVAL:
Exclusive screening sessions will run at 10.30am each Saturday and Sunday from 15 February – 16 March at Event Cinemas and Birch Carroll& Coyle. Tickets are just $8* each which includes a Disney Princess guidebook to guide you through the festival. Collect a different Princess card each week and dress up for your chance to win best dress prizes!

Mark your diaries now for the following films:

Book your tickets at www.princessfilmfestival.com.au