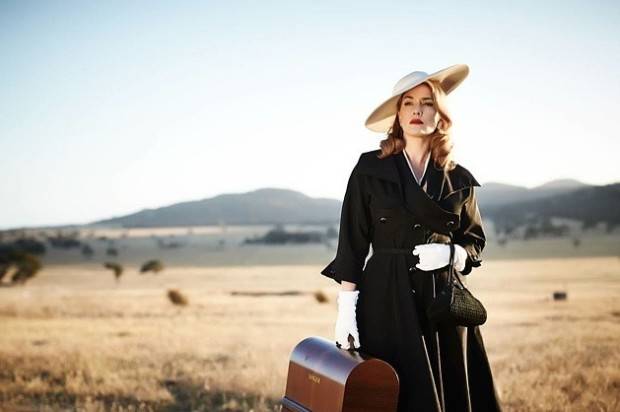 Comedy and tragedy go hand-in-hand in ‘The Dressmaker’, a larger-than-life, heartbreaking laugher that benefits from its brave cast and stellar wardrobe selection. Not the warm and fuzzy dramedy some may be expecting based off its trailer, Jocelyn Moorhouse’s adaptation of Rosalie Ham’s novel is a considerably dark affair with vibrant brushes of eccentricity to keep the whole product fresh.

Beginning on a foretelling dark and stormy night in the fictitious Australian outback town of Dungatar in 1951, Myrtle “Tilly” Dunnage (the exquisite Kate Winslet) has returned; “I’m back you bastards” she assuredly coos. Known as “the girl who moved away”, Tilly has long left her dinky little town persona behind as she swans about in high-end couture following years of work in such locations as Paris and Milan. Just why she has returned is one of the great mysteries ‘The Dressmaker’ has to offer, and it certainly doesn’t help that neither Tilly or her ailing mother Molly (Judy Davis, absolutely exceptional) have a clear memory between them as to what exactly was the incident from Tilly’s childhood that kickstarted her isolation from the town.

Skeletons in the closet and a township soaked deep in hate and resentment bring forth the film’s wicked sense of humour as Tilly tries with all her might to remember the truth and bring around the town’s point of view; a town packed to the brim with a who’s who of the Australian film industry, with such faces as Shane Jacobson, Shane Bourne, Kerry Fox, Sarah Snook and Rebecca Gibney amongst the colourful Dungatar folk. Sadly, the majority of these characters are particularly awful people but that only enhances the effect Tilly’s inevitable revenge will have, and it allows the likes of Winslet, Davis, Liam Hemsworth and Hugo Weaving to shine in roles that all play to the performer’s strengths.

Perfecting the Australian accent to a tee (Hemsworth and Snook both admitted to temporarily forgetting the star was any other nationality) Winslet rules the film with an iron fist and an enviable wardrobe, whilst Davis relishes her unconventional role bringing both a sense of warmth and unpredictability. Hemsworth is perhaps the most normal of all the characters, his Teddy is the perennial love interest whose rather striking aesthetics thankfully don’t overshadow his abilities as a leading man – something we haven’t really seen the actor tackle. And then there’s Hugo Weaving, all dressed up and nowhere to go, he is simply luminous as the town’s police officer who has a particular penchant for Dior gowns and feather boas (his first meeting on screen with Winslet is a hoot) and ‘The Dressmaker’ feels even more alive when he’s involved.

Moorehouse, working alongside P.J. Hogan (‘Muriel’s Wedding’), clearly had a specific vision with this film, and though it may be one that ultimately keeps its audience at an arm’s distance, the emotional reaction can’t be denied with ‘The Dressmaker’ at once amusing, shocking and upsetting its unsuspecting audience. Far more bizarre than one would be expecting, this surprising venture succeeds as it refuses to compromise on its bleak, beautiful nature.