THE GAP OF TIME BY JEANETTE WINTERSON – BOOK REVIEW

Book review Jeanette Winterson Kylie Thompson The Gap Of Time by Caroline Russo | on October 6, 2015 | 0 comments | in Book Reviews | Like it There are books that you breeze through in an afternoon, and books that make you keep a notebook on hand to keep track of all the beautiful quotes hidden within them. The Gap of Time by Jeanette Winterson is certainly the latter.
Next April sees the 400th Anniversary of Shakespeare’s death, and to commemorate, Penguin Random House is releasing the Hogarth Shakespeare Series: a series of modern re-imaginings of the Bard’s beloved works. Big name authors such as Margaret Atwood, Gillian Flynn, and Jo Nesbo will be retelling their favourite Shakespearean work and bringing a modern slant to the classic tales.

The Winter’s Tale isn’t the most famous or popular of Shakespeare’s works, and yet it has had a remarkable impact on popular culture in the modern age. Whether it’s JK Rowling’s Hermione Granger, or Winterson’s subtle nods to a story she sees as a totem for her writing, there are countless hat-tips in literature to this classic story of madness, grief, and the potential for forgiveness. It’s this story that Winterson has chosen to explore in The Gap of Time.
Set in a modern, if fictitious, world, The Gap of Time follows a relatively large cast of characters as they gradually learn how their interwoven pasts bind them together. At the centre of this tangled web of misdeeds and maliciousness is Perdita, a kind hearted singer struggling to understand why her biological family gave her away when she was a baby.

The beauty of Winterson’s writing lies in her ability to make even the most banal or crass of characters capable of wisdom and profundity; part of the joy of reading her stories is stumbling upon moments of magic from characters that would normally be easy to overlook.

For many of us, the name ‘Shakespeare’ conjures unpleasant memories of being forced to vocally stumble through pages of writing that wasn’t quite English enough to follow clearly. The flow and poetry of the Bard is often lost in a classroom setting; bludgeoned to death by mumbling students and phonetic attempts at pronunciation. While a lot of modern performances of Shakespeare’s works keep the language and update the setting, The Gap of Time isn’t the bookish equivalent of Leonardo DiCaprio’s Romeo in a Hawaiian shirt. Winterson is quick to distance her characters from their more poetic roots and to make sure they would be able to survive a conversation in a modern setting. This is real-world Shakespeare, the language stripped bare and led gleefully into the modern age of internet gaming and corporate gluttony.

For those who want to understand Shakespeare, but can’t stand the overabundance of ‘ye olde worlde’ speak, this is a novel, and a series, you won’t want to miss. For lovers of the Bard’s work, The Gap of Time might just be the ideal Christmas gift, and a beautiful way to relax in the inevitable summer heat.

The Gap of Time is published by Random House Australia, and is available through Kindle, iTunes, the publisher’s website, and in print through bookshops around the country. 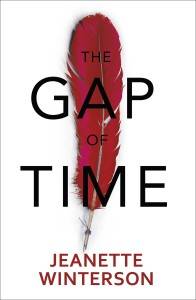 Rating: 4 and a half stars
Genre: fiction, romance and family drama