cooking Kylie Thompson Shannon Bard The Gourmet Mexican Kitchen by Caroline Russo | on October 13, 2015 | 0 comments | in Book Reviews | Like it As a general rule, I’m sceptical of cookbooks paying tribute to cultures the author isn’t actually a part of. I’d much rather be taught how to cook Mexican by someone who has been raised in Mexico and been a part of the culture, than someone who has lived in a state near enough to Mexico that their general cuisine is influenced by its neighbour. Oftentimes, it feels like a chef has spotted a foodie trend and thrown their name at a cookbook, rather than having a genuine love of the flavours and culture that goes into the creation of a particular cuisine.

It’s amazing, for example, just how many celebrity chefs just so happen to all find the same trend in time for Christmas. There are a lot of foodie trend followers out there, but though The Gourmet Mexican Kitchen is an homage to cooking traditional Mexican fare by a woman who isn’t Mexican, Chef Shannon Bard seems to genuinely adore Mexican culture and cuisine. As the Chef and owner of Zapoteca Restaurant and Tequileria, Wise has had a lot of practise in developing and perfecting Mexican, and Mexican-inspired dishes, and she’s brought her considerable talents to the task of helping aspiring cooks find their feet in the world of Mexican cooking.

The recipes Bard has collected here are an introduction to a range of cooking techniques and ingredients that are intriguing enough to keep you interested in trying them out, without being indecipherable to those of us who have never visited Mexico. To keep things simple, Bard has included a chapter solely focused on the new ingredients (and their substitutions as required), techniques, and equipment needed to try these recipes at home. Usually, this section of a cookbook is easy to bypass. Here, though, it’s probably worth taking the time to read, even if you’re familiar with the flavours of Mexican cuisine.

The simple, classic favourites like tortillas, margaritas, salsas, and guacamoles are all included, with a range of different varieties available for anyone ready to find a new favourite. But for those feeling particularly adventurous, more advanced treats such as chocolate jalapeño ice cream, churros, and Mexican meatballs in chipotle red chilli sauce share pride of place with the foods so many of us know and love.

The photographs are beautifully styled, and even better, they’re simply enough presented that there’s hope for those of us who haven’t mastered the subtle art of precisely arranging food to make it look randomly placed. The beauty of The Gourmet Mexican Kitchen lies in its simplicity. The meals look fresh and flavourful without needing a stylist on hand to make them look like they’re presented in the book.

This probably isn’t the go-to guide for those with a lot of experience Mexican cooking, but for those new to the flavours and fixings of the cuisine, The Gourmet Mexican Kitchen is a useful introduction to a range of new ingredients and skills that will be a welcome addition to your upcoming summer cooking.

The Gourmet Mexican Kitchen is published by Pan Macmillan Australia, and is available on iTunes and Kindle, through the publisher’s website, and at leading bookstores nationwide. 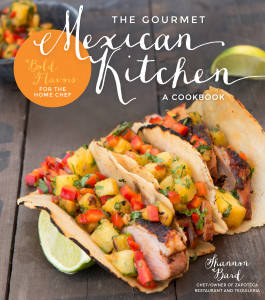 Rating: 3 and a half stars
Genre: Cooking