The Importance of Being Earnest by Oscar Wilde.

Importance of being earnest live theatre Gold Coast by Caroline Russo | on November 20, 2021 | 0 comments | in Theatre | Like it Oscar Wilde’s highly mannered 1895 drawing room comedy, The Importance of Being Earnest, lends itself to eccentric interpretations.
Liam Mather’s take on the classic farce, now set in the 1980s, seems to inhabit a surreal world peppered with ‘80s references.
John Worthington (Daniel Dosek) and Algernon (Jack Lovett) have morphed from sophisticated straight-jacketed Victorian gentlemen, with a caustic wit, into hip me generation bumptious types.
The result is a couple of likely lads who are well and truly stripped of the class driven Victorian corset and a version of Earnest which offers swings and roundabouts. 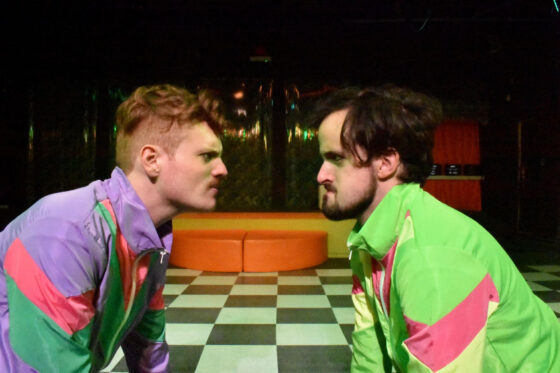 That leads to gains and losses in style, but the purists still have their traditional Earnest, while young audiences can now see this classic cut through to their world.
This is good for the future of community theatre in the same way that the recent production of American Idiot, featuring the music Green Day, struck a cord with the young and young at heart.
However, over all it would be comforting to think that Wilde – who was all for breaking with conventions – would like this upbeat Earnest, which even manages a few rock numbers from the era
Despite the format change, the infusion of more robust physical comedy, the links with the era and period references Mather remains faithful to Wilde’s narrative and most importantly his brand of oh-so clever witty dialogue.

John Worthing is still madly in love with Gwendolen (Laura Coulton) and Algie is still destined to fall for Cecily (Chloe Smith), while Lady Bracknell (Brad Chapman) straggles centre stage like some Thatcheresque monolith. The girls are equally smitten and totally in love with the idea of romance. Meanwhile, Miss Prism (Martina French) and Dr Chasuble (Phillip Victor) give us a more mature romance, although no less awkward. Interestingly Mathers notes in the program that when he started to look at the two eras (1895 & the mid-‘80s) he unearthed some engaging similarities.
There was, according to Mathers, a revival in Victorian fashion and design in the ‘80s and British PM Margaret Thatcher was keen to re-introduce the 19th century values she held so dear.
(One wonders if that includes the hypocrisy of the time not to mention the child exploitation but then Wilde’s work and life story can bring out the cynic in one).
The ‘80s was indeed an era of contrasts with those in the money splashing it around, while fashion, music and show business were glizy and showy in the extreme.
The performances all around in this production are enthusiastic and packed with energy, which transcends the footlights.

I think at the end of the day Dear Oscar is in good hands and if our community theatres are going to continue with current trends they should seriously consider establishing mosh pits in their auditoriums.