THE INSANITY OF MURDER BY FELICITY YOUNG – BOOK REVIEW

Book review Felicity Young Kylie Thompson The Insanity Of Murder by Caroline Russo | on October 12, 2015 | 0 comments | in Book Reviews | Like it Dr Dody McClelend is a woman making a name for herself as London’s first female autopsy surgeon. For many, it’s an insult to the profession to have a woman involved in the more gruesome sciences. But Dody loves her work, and the chance to right wrongs and bring justice. At least, until an explosion rocks the Necropolis Railway Station.

Dody’s sister, Florence, is a suffragette quickly implicated in the crime. If Florence is jailed again for her protests, Dody knows her sister will hunger strike, and be force fed against her will. The treatment had almost destroyed Florence last time, and Dody is desperate to protect her from further harm. To keep her sister safe, Dody must choose between risking her career by lying, or being honest with her secret paramour, Chief Inspector Matthew Pike, in hopes that he can help.

When a woman’s body arrives at the morgue with evidence of an unnecessary and brutal surgery most likely done to calm her temperament, Dody is livid. But while he’s concerned about the surgery, Pike has problems of his own in the form of a doddery old lady desperately searching for her possibly imaginary friend.

The Insanity of Murder is a page turner of a crime novel, and the sort of book you’ll want to hide yourself away with and devour in one sitting. Fast paced and well thought out, the story has enough twists and turns to keep readers guessing, and second guessing.

Dody is a wonderfully strong heroine. She’s confident and intelligent; able to firmly hold her own against a system that undervalues her without ever trying to be one of the boys. Dody is a wonderfully complex character; romantic and feminine and scientifically minded in turns, capable of brash recklessness and of admitting her failings and trying to do better.

This isn’t a book for lovers of gore, and yet at times the honest depiction of medical treatments for women who went against the Victorian ideal of femininity is unsettling to the point of being creepy. The brutal surgery Dody rails against was once common practise to help sufferers of ‘hysteria’, and to help husbands better control their wives.

The characters are likeable, complex, and certainly endearing enough to leave readers hoping for a happily ever after for them all. The romance plot works well as Dody and Pike try and figure out how to bring their separate lives closer together, and the pair are sweet without being cloying, or losing their professionalism as they work together.
While reading the earlier works of a series is always recommended, The Insanity of Murder works as a stand-alone read without being overly confusing to those who haven’t read the rest of the Dody McCleland Mysteries.

The Insanity of Murder is published by Harper Collins, and is available through the big name e-book sellers. 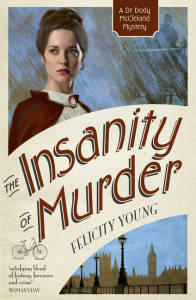 Rating: 3 and a half stars
Genre: crime and romance in a historical setting