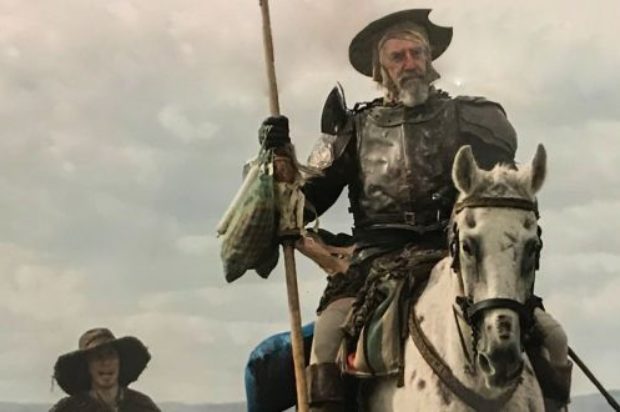 ‘The Man Who Killed Don Quixote’ is a lively redemption story largely revolving around a vain, self absorbed advertising director named Toby Grisoni (played by Adam Driver) who has decided to film his commercial featuring Don Quixote in rural Spain. After an unsuccessful day of shooting he is reminded of a student film based around Don Quixote he had directed ten years earlier in this same location. Slowly he is reunited with various cast and crew from his film who show him the state he had left things and the damage he had done. This takes an unexpected turn when the actor who took on the role of Don Quixote in his film re-enters his life.

The film is directed by Terry Gilliam who well known in many film and television circles for his incredible directing and visual style. He is most commonly remembered as a member of Monty Python, where he created the visual effects involved in all Python films that became a crucial part of the groups identity. From there he directed iconic films such as ‘Time Bandits’ (which her also wrote with fellow Monty Python member Michael Palin), ‘The Fisher King’, ’12 Monkeys’, ‘Fear and Loathing in Las Vegas’, ‘The Brothers Grimm’ where he worked with Heath Ledger who he reunited with on ‘The Imaginarium of Doctor Parnassus’. Despite the differences between all of his films, his keen eye for visuals like no other are visible in all of these films and between the beautiful scenery shots and the wacky special effects shots, this film is no exception.

This film is filled with seasoned actors who once again show their range. The film is led by Adam Driver who has recently been seen playing Kylo Ren in ‘Star Wars: The Force Awakens’ in 2015 and ‘Star Wars: The Last Jedi’ in 2017 as well as performing alongside Harry Potter alumni Daniel Radcliffe in 2013s ‘What If’ and was a main cast member on the HBO series ‘Girls’. Driver is joined by Jonathan Pryce who plays Don Quixote himself. Pryce has been in a wide variety of performances over the years from playing the Master on the Red Nose Day special ‘Doctor Who: The Curse of Fatal Death’ to playing the High Sparrow on the HBO hit series ‘Game of Thrones’. Pryce has also been a seasoned stage actor having performed in such productions as ‘The Taming of the Shrew’, ‘Hamlet’, ‘Macbeth’, ‘Miss Saigon’ and ‘King Lear’. They are also Joined by Stellan Skarsgård who has been recently seen playing Erik Selvig in various Marvel films as well as Bill Anderson in both ‘Mamma Mia’ films. Skarsgård has also been seen in ‘Hector and the Search for Happiness’in 2014 and ‘Cinderella’ in 2015. He is set to be in the 2020 adaptation of the Frank Herbert novel ‘Dune’.

This film is a manic masterpiece that will have you guessing throughout. I could not recommend this film more to anyone as it has everything you could want in a film from romance and action to character development and self reflection like no other. Definitely check this movie out.