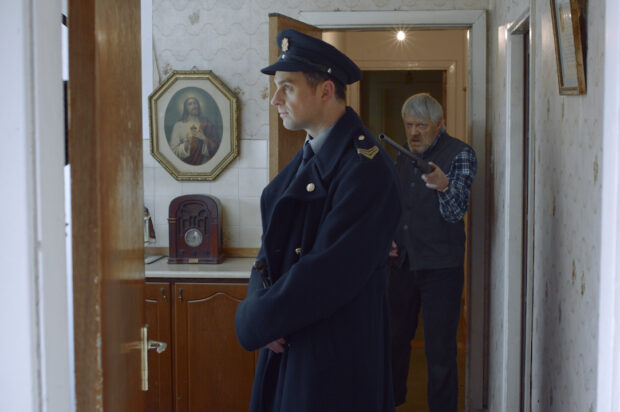 Continuing its steady growth after its launch at AFM last November, MSC has today signed world rights to Anchorage ahead of Marche Du Cannes in July.

Anchorage is the feature film directorial debut of Scott Monahan with screenplay penned by Dakota Loesch. The film follows Jacob (played by Monahan) and John (played by Loesch) two brothers who attempt to drive a trunk full of opioids from Florida to Alaska to cash-in big in the Land of Gold. A split-second act of violence somewhere in the California desert derails their trip and sets them on a crash course with tragedy. “This story is just a teardrop in the ocean of stories of those affected by this drug,” says Monahan. Loesch adds, “Creating this film was a way for us to process how the opioid epidemic has affected our lives and the lives of people around us.”

Regarding the film, Paul Yates MSC CEO said: “It’s a huge opportunity and privilege for MSC to be representing such a profound and riveting film. We consider Anchorage to be the Easy Rider of the opioid age. It’s so often we see stories coming out of the U.S regarding the opioid crisis and it’s extremely exciting for us to be representing one that talks about it in such an intimate character-driven way.
Regarding the MSC deal Director Scott Monahan said: “We’ve been following the rapid progress of the MSC for a while now and were really struck by the perseverance and hard work they have been putting in for all their films, especially during such a hard time. We’re really happy to have found a team and home for Anchorage with MSC and we can’t wait to share this film with the world.
The world premiere and festival line up for Anchorage is due to be set in coming weeks.

LONDON UK JUNE 09th 2021 – MSC London based sales agency has today announced that it has added Irish crime thriller The Tale of Billy O’C to its worldwide sales slate ahead of the Cannes market in July.

The Tale Of Billy O’C is the directorial debut by writer Pete Harris. It’s a crime thriller set in a small village in County Kilkenny, Ireland in 1975 which unfolds with a backdrop of an IRA safe house and small-town politics. BRENDAN CORCORAN plays Billy, a retired pensioner in rural Kilkenny who finds himself getting dragged into the affairs of the IRA, whilst the town turns on him for the murder of a local safehouse operative. The film also stars TONY KELLY, SOPHIE MERRY AND NEIL SHEEHY.

Paul Yates MSC CEO said: “We’ve always been a fan of Irish content. It’s extremely exciting for us to be representing something which strikes a similar tone and balance to the likes of McDonaghs 2011 film The Guard. The talent that has gone into this production is just absolutely striking on every front, from the storytelling, acting, cinematography and music. It’s a hugely ambitions production that is punching extremely high and our hopes for its reception are also very high.”

Regarding the films political setting Director Pete Harris said: “I wanted to make a film that digs into the rich culture that existed in rural Ireland in the 1970s that showcased the landscape, the toughness, the humour, the music and strength of local communities. I also set out to write a script that keeps you guessing, so I really hope audience appreciate the unpredictability of the story. This is not a “troubles” film as such, it just happens to take place during the time period. It’s really about how just an element of this conflict can touch a small community, seemingly detached being far south of the border in Kilkenny, and still threaten to tear apart families and communities. It’s a reminder of why no one ever wants to go back to living with violence.”