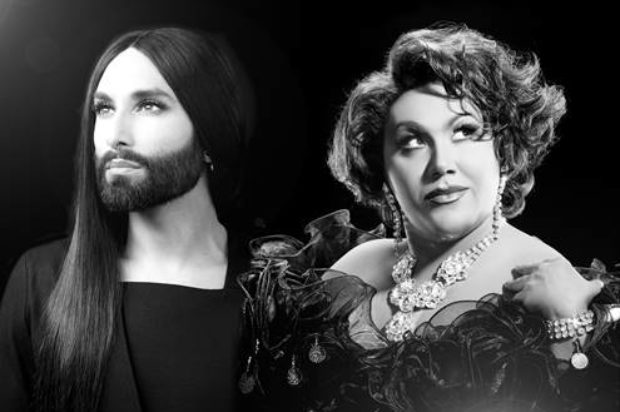 Ladies and Gentlemen are welcome to the stage for what will be an evening to be remembered as stage creator and performer Trevor Ashley, Eurovision legend Conchita Wurst and Australian singer-songwriter Kate Miller-Heidke headline QPAC on February 26th.

Touring Sydney and Melbourne, and for one night only at Brisbane’s QPAC Concert Hall, this is one show audiences cannot afford to miss. This will be one of Trevor’s final Australian performances for the foreseeable future, as he takes a break from the stage. One of theatre’s most highly talented performers to grace the stage, Trevor chatted to Hush Hush Biz about the show and his decorated career.

Trevor told Hush Hush he was “super excited” to take to the stage and work with recent AM recipient, Michael Tyack, and the 38-piece Camerata Queensland Chamber Orchestra. “It is great for us to work with Conchita as well, as it will be the first time for her in Brisbane. And also my good friend Kate, last time we worked together was over ten years ago in Sydney at the Opera House, so it will be additionally lovely to have her part in the show! For myself, after this, I will take a period break and plan to go overseas. It has been a full-on period of work over the years in other stage productions I have been in, and I need to rest a bit to come back with some fresh ideas later in the year”.

Trevor told Hush Hush some of the songs he plans to perform, giving audiences a bit of a treat to multiple stage and screen legends. “I am doing a few things I have not done before, like a tribute to Judy Garland and Peter Allen, [and] also the classic song “Windmills of Your Mind” with a few songs from Barbra Streisand.”

Conchita will also perform tracks off her new album, Truth Over Magnitude, and audiences can look forward to a few Bond songs on the night, including “Writing On the Wall”, “Diamonds are Forever”, “Moonraker”, and “Goldfinger”. Trevor’s excitement for this section of the night is apparent; “I so love the Bond songs!”

Another major aspect of Trevor’s onstage routine are his costumes, and what he plans to wear. “The gowns are being made as we speak, and I am having a few done with my main dressmaker, Angie White. Dallas Delaware also makes my costumes, they are both amazing at what they do. I am not sure how many costume changes I have yet, but this will be sorted soon!”

Talking on the makeup side, Trevor was more than willing to get candid on his routine. “This comes with many years of preparing for all types of shows, and each one is different of course, but I always arrive two hours earlier to prepare. Over the time of my career, I do get faster at it. The overall sense to me in this business is, when I am on stage, I love to perform and make people laugh and leave the audience feeling good for a night out. That is showbiz!” And Trevor is pure showbiz in every sense of the word.

International star, and former Eurovision winner Conchita Wurst will arrive two days before the first Brisbane show. “We have little rehearsal time combined with Kate, but in today’s world you can communicate on all the other parts and putting the music prep together, and we all know one another well so that combines great energy to bounce with.”

With Australia’s Eurovision decider taking place last Saturday, and two previous Eurovision finalists in Conchita Wurst and Australia’s Kate Miller Heidke (who gave an outstanding performance last year), Trevor added that he will be looking to enter next year, in collaboration with long term friend and top Australian music composer, John Forman. “There is one song I love of John’s, “The Flame” and I’d love to see if we can work on this so I can go and belt it out!”

For the upcoming show, audiences can expect an unmissable night that will deliver lots of laughs from three great voices and a world-class orchestra.