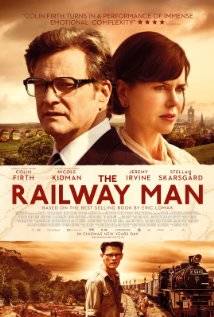 THE RAILWAY MAN, the British/Australian film starring Colin Firth and Nicole Kidman, has reached $7m at the Australian box office, making it one of the most successful Australian films of recent years.

“We are absolutely thrilled with achieving this significant box office milestone. We appreciate the support of the media, who have championed the film since its world premiere at the Toronto Film Festival and of our partner in the release Paramount Pictures. We would also like to thank our exhibition partners across the country, who have enthusiastically backed the film with extended seasons. The film has been playing at some locations eight weeks, which is a tremendous show of support,” said Transmission’s Richard Payten.

“I particularly want to acknowledge our regional cinema partners and the regional Australian audiences who have contributed so significantly to this outstanding result.”

THE RAILWAY MAN also continues to do well in the UK, where it has grossed over £5m since releasing on January 9. The Weinstein Company will release the film in the US later in 2014.

THE RAILWAY MAN is based on the memoir of Eric Lomax, a British office captured by the Japanese at the fall of Singapore and forced to work on the infamous Thai/Burma ‘Death’ Railway.