#cinematic THE ROYAL EDINBURGH MILITARY TATTOO by Caroline Russo | on November 1, 2022 | 0 comments | in Film Release & Reviews | Like it

The show features performers from Australia as well as the UK, New Zealand, Mexico, The United States, Germany, Canada, and Switzerland 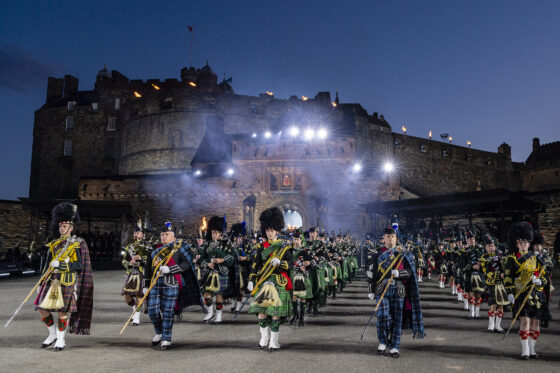 The Royal Edinburgh Military Tattoo, which made its highly anticipated return to the Edinburgh Castle Esplanade in 2022 with its show Voices, will screen in Australian cinemas on November 19 and 20.

Featuring over 900 performers, Voices is a spectacular combination of music, dance, and military precision from some of the world’s leading armed forces and cultural performers from the UK, Mexico, The United States, Australia (Brisbane Boys College Pipes and Drums), New Zealand (the New Zealand Army Band, and The Pipes and Drums of Christchurch City), Switzerland, Germany, and Canada.

This show is the first from the Tattoo’s new, and first non-military, Creative Director – New Zealand-born Michael Braithwaite – whose stellar background in entertainment includes producing Live Entertainment for the Jim Henson Company; working for Warner Brothers on two Harry Potter films and producing the Outdoor Festival for the London 2012 Olympics and Paralympics.

This is also the first show under the Tattoo’s bold new brand ethos, which embraces military tradition and combines it with exciting innovations and contemporary touches.

Voices is a celebration of expression which draws inspiration from people across the globe connecting to share their voices creatively through spoken word, song, music, and dance – languages common to all.

Military acts continue to play a central role in the performance, with the Army acting as the lead service this year. Audiences will hear the legendary sound of the Massed Pipes and Drums, supported by Tattoo Pipes and Drums, Tattoo Dancers, Tattoo Fiddlers, and musicians from UK Military Regiments.

Celebrated as the Musical Ambassadors of the Army, The United States Army Field Band make their Tattoo debut this year with a marching, military blend of traditional and contemporary music. The United States Air Force Honor Guard, the official ceremonial unit of the Air Force, returns to the Tattoo with its dynamic display of precision drill.

Acts include the iconic The Top Secret Drum Corps; the colourful carnival energy of 100 performers from Banda Monumental de Mexico and the renowned Highland Divas, in their Tattoo debut, showcasing their eclectic repertoire including the Folk Music of Ireland, Scotland, and New Zealand.

Michael Braithwaite, Creative Director of The Royal Edinburgh Military Tattoo, Said:
“Over the years I’ve been hugely privileged to work for some of the biggest entertainment brands and productions in the world but taking the creative reins of the Tattoo and building on the fantastic shows that have been produced over the past 70 years was definitely one of my most exciting challenges yet.”

Buster Howes, Chief Executive of The Royal Edinburgh Military Tattoo, said of this year’s Tattoo:
“The acts, as ever, showcase a must-see spectacle that excites audiences with a blend of fresh and modern performances, with the traditional, military elements that it’s known and loved for.”

Janelle Mason, CinemaLive Director and Producer, said:
“We’re really excited to bring this year’s new-look Tattoo to cinema audiences. Its vibrant energy, spectacular location and the theatricality of its dances, songs and music make for a perfect big-screen experience with cinema-quality sound. ‘Voices’ will amaze and entertain both traditional lovers of the Tattoo and a brand-new audience.”

The Royal Edinburgh Military Tattoo will screen in more than 120 cinemas around Australia. Tickets are on sale now from cinema box offices and websites.