The Sapphires Get Crowning Glory of AACTA Awards

AACTA Awards JESSICA MALBOY russell crowe the sapphires by Caroline Russo | on January 30, 2013 | 0 comments | in Hush Hush Gossip | Like it 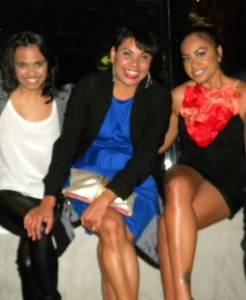 AUSTRALIAN ACADEMY OF CINEMA AND TELEVISION OF ARTS

Host Russell Crowe and Australian Academy of Cinema and Television Arts (AACTA) President, Geoffrey Rush, were tonight joined on stage by internationally acclaimed Australian actors including Cate Blanchett and Nicole Kidman to honour the year’s best achievements in Australian film and television at the 2nd AACTA Awards Ceremony, held at the brand new The Star Event Centre in Sydney.

It was a golden night for The Sapphires, crowning a year already filled with sparkling success. Since premiering in Cannes in May 2012, the toe-tapping musical drama about four Aboriginal girls who formed a singing group in the 1960s has garnered audience awards all over the world and box office triumph at home. Tonight saw The Sapphires take home six AACTA Awards – Best Film, Best Director (Wayne Blair), Best Lead Actress (Deborah Mailman), Best Lead Actor (Chris O’Dowd), Best Supporting Actress (Jessica Mauboy) and Best Adapted Screenplay (Keith Thompson, Tony Briggs) – bringing the film’s tally to a total of 11 AACTA Awards, including those previously announced at the 2nd AACTA Awards Luncheon, presented by Deluxe, on Monday 28 January.

The dramatic thriller Wish You Were Here, shot and set partly in Cambodia, won the AACTA Award for Best Original Screenplay for husband and wife creative team writer/director Kieran Darcy-Smith and writer/actress Felicity Price. Antony Starr also won Best Supporting Actor for his enigmatic performance in Wish You Were Here.

A special highlight of tonight’s AACTA Awards Ceremony was the presentation of the Byron Kennedy Award to the late filmmaker, animator and artist Sarah Watt (1958 – 2011), accepted on her behalf by her son, Clem McInnes. A moving video tribute reminded audiences of the consummate skill, elegance and humour Watt brought to the screen in works like Look Both Ways, Small Treasures and My Year Without Sex. Presented by Matt Day, Watt was chosen as this year’s Byron Kennedy Award recipient “for her brave, innovative filmmaking’’ and because “without pretension, her work broke all the rules, yet her singular view connected to a wide audience by its profound emotional honesty.”

The ABC was a big winner at tonight’s AACTA Awards, with the groundbreaking Indigenous drama Redfern Now winning Best Screenplay in Television (Steven McGregor for Episode 6) and Leah Purcell winning Best Lead Actress in a Television Drama for her performance in Episode 1. Also at the ABC, Rake co-creator and star, Richard Roxburgh took home the AACTA Award for Best Lead Actor for his performance as the lovable rogue, Cleaver Greene. Jeffrey Walker won Best Direction in Television for Jack Irish: Bad Debts, also for the ABC.

Aaron Jeffery won the AACTA award for Best Guest or Supporting Actor in a Television Drama for his performance as bikie-turned-police-informant Frank O’Rourke in the Nine Network’s Underbelly Badness.

In 2012 the Australian Academy of Cinema and Television Arts introduced the new AACTA Award for Best Reality Television Series, and the first recipient of this award was announced tonight, with the exciting adventure-based contest of The Amazing Race Australia (Channel Seven) taking home the golden statuette.

The news.com.au Audience Choice Award for Most Memorable Screen Moment was also announced on the night, with a win by The Sapphires confirming the public’s love of the film, along with the industry’s.

In addition to Award presentations by some of Australia’s most successful performers and practitioners, the 2nd AACTA Awards Ceremony featured some of the most popular names in Australian entertainment, including show-stopping performances by Jessica Mauboy and the cast of The Sapphires, accompanied by original members of the Indigenous girl group, and Dragon, who performed the theme song from Puberty Blues, “Are You Old Enough?”.

“Tonight’s celebrations are the culmination of an extraordinarily exciting year in Australian film and television, and on behalf of the Australian Academy, I congratulate all winners of the 2nd AACTA Awards announced here in Sydney over two major events this week.

“In this, our second year of the new Australian Academy, we have built on the foundations laid by the stunningly successful inaugural AACTA Awards, and this has been achieved with the help of many, including our esteemed President, Geoffrey Rush, who works hardest of all for the Academy.

“I’m also delighted to see so many of Australia’s screen icons return home to support to our Australian Academy, including tonight’s host Russell Crowe, as we celebrate Australia’s international stamp of screen success, the AACTA Awards.

“I also acknowledge the support of our partners and sponsors, in particular the New South Wales government through its tourism and major events agency Destination New South Wales, whose support and commitment has been critical to the AACTA Awards.’’

The 2nd AACTA Awards Ceremony will be broadcast tonight on Network Ten at 9:30pm.

“The AACTA Awards consolidates Australia’s position as a powerhouse of creative talent, and I am pleased to see Sydney and NSW once again excel as leaders in film and television production. The AACTA Awards are a key creative industries event on the NSW Events Calendar, proudly produced and hosted in Sydney, the creative capital of Australia. The NSW Government is pleased to support the AACTA Awards, through its tourism and major events agency Destination NSW,” Mr Souris said.

The complete list of winners announced at the 2ND AACTA Awards Ceremony is as follows: BYRON KENNEDY AWARD