THE STAR ENTERTAINMENT GROUP APPROVED TO BUILD NEW HOTEL & APARTMENT TOWER AT JUPITERS GOLD COAST
The Queensland Government has approved The Star Entertainment Group’s application to construct a new 200-metre hotel and apartment tower at Jupiters Gold Coast as part of an ongoing transformation of the iconic property.
Construction of the new 700-key complex at Broadbeach is expected to start in 2017 and will signal an exciting new era for tourism infrastructure on the Gold Coast
“I would like to thank the Queensland Government for its ongoing support as we create a world-class tourism asset that will contribute significantly to the appeal of the Gold Coast and this State,” said Matt Bekier, Managing Director and CEO of The Star Entertainment Group.
“Appreciation is also extended to the City of Gold Coast for the support and enthusiasm it has shown for this landmark tower development.
“We are making an enduring commitment to South East Queensland through a long-term master plan for our Gold Coast property and a $3 billion investment at Queen’s Wharf Brisbane, both involving our Hong Kong based partners Chow Tai Fook and Far East Consortium.
“The Star Entertainment Group and our partners have great confidence in the tourism outlook for Queensland.
“With increasing visitation forecasts out of Asia and China, together with strong domestic tourism figures, Queensland is well-placed to capture this growth but needs enhanced tourism product to meet the demand.
“Our vision is to continue to transform Jupiters into a truly integrated resort on the Gold Coast, and help position the tourism industry as an economic driver in Queensland.”
The new tower is the first of up to five within a future development plan for Jupiters, unveiled earlier this year and detailed throughout an extensive community information campaign.
The development will be undertaken by The Star Entertainment Group in a joint venture with Chow Tai Fook and Far East Consortium.
Included in the tower construction will be an exciting new restaurant and bar concept, and a luxurious day spa.
An eighth floor recreation deck with ocean views will include a resort pool for hotel guests and quality residential facilities, while a range of flexible open spaces surrounded by tropical gardens will leverage the enviable Gold Coast climate and lifestyle.
Construction is expected to begin in 2017, subject to successful apartment pre-sales, and will add to the existing building activity at Jupiters where a new six-star, 17-storey luxury hotel tower is under construction at the front of the property.

 The two projects are part of a combined investment of $850 million at the Broadbeach site which will increase overall accommodation to almost 1400 rooms, generate more than 1000 construction jobs and increase Jupiters’ workforce to around 2300 employees once operational.
The Star Entertainment Group Managing Director Queensland Geoff Hogg said the new tower will continue an extensive and ongoing redevelopment project, which will lead next year to the rebranding of the Jupiters property to The Star Gold Coast.
“The existing transformation is going well. By the end of the year we’ll have completed the refurbishment of the almost 600 rooms in the existing 31-year-old hotel, together with the addition of new food and beverage outlets,” Mr Hogg said.
“We are also well beyond the halfway milestone in the build of the 17-storey six-star hotel tower at the front of the property and it remains on track to be fully operational before the Gold Coast 2018 Commonwealth Games.”
Mr Hogg said the newly approved 200 metre tower, with an expected start to construction next year, would be planned for completion in 2020.
The 4.5-star hotel will ensure The Star Gold Coast has a range of price points for guests, adding to the refurbished five-star facility and the underway six-star tower.
The long term master plan concept for the property provides future development options potentially worth multiple billions of dollars featuring:
 Up to five new hotel and/or apartment towers
 A world-class recreational deck with water features
 Tropical gardens, pools, and spa
 New entertainment facilities.
The concept also looks at ways to enhance the connection of Broadbeach Island with Pacific Fair, the Gold Coast Convention Centre, and the surrounding Broadbeach precinct.
“If approved, our master plan would create a seamless flow of phased developments to provide the ultimate dining, retail, recreation, and gaming experiences in the Gold Coast,” Mr Hogg said.
“It would ensure our current projects complement and support our longer-term investment plans, with overall design that achieves the right mix of accommodation and leisure offerings and, importantly, improves connectivity throughout the local Broadbeach precinct.” 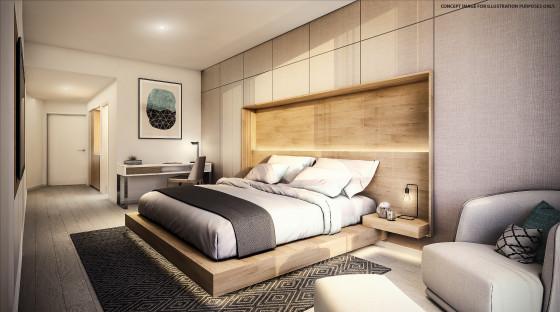 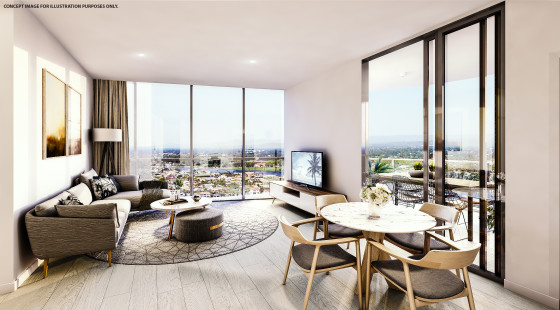