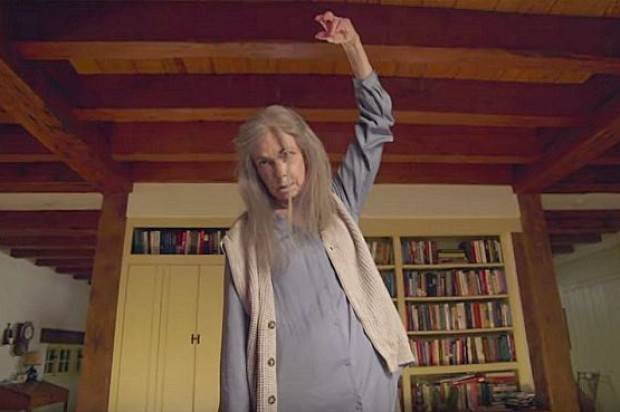 While it’s still premature to declare writer/director M. Night Shyamalan is back to his winning form with ‘The Visit’, his latest scarer is enough of a step in the right direction to prove he’s potentially on the path to restoring the groove he so desperately lost with back-catalogue disasters like ‘The Last Airbender’ and ‘After Earth’. For one thing, ‘The Visit’ is intentionally funny (no awkward giggles ala ‘The Happening’ here) and given that Shyamalan has essentially dwindled down to a B-movie director, it works in the film’s favour that he’s embraced this fact which in turn elevates the movie’s campy vibe.

The story itself is alarmingly simple with Kathryn Hahn’s single mother (a name is never given) gearing up to take a much-needed vacation with her new beau. Still reeling from her ex-husband’s abrupt departure, her getaway is somewhat of a necessity so her understanding children are more than compliant when she sends them off to stay with their grandparents for the duration of her trip. All would be well and good if dear old mother wasn’t estranged from her parents so children Becca (Olivia DeJonge) and Tyler (Ed Oxenbould) see this as the perfect opportunity to mend their frayed rapport and, aspiring filmmaker that she is, Becca intends on documenting the visit; this ploy gives right to Shyamalan adopting the tired “found footage” approach, yet thankfully utilises it to potent effect as the film still maintains a strong cinematic scope as opposed to the shaky, hand-held style we’ve become accustomed to.

Initially, Nana (Deanna Dunagan) and Pop Pop (Peter McRobbie) come across as sweet, if slightly eccentric, folk whose household drawbacks of no wi-fi and 9:30pm bedtime aren’t as grim as expected for the electronically-inclined children. It isn’t too long though before Becca and Tyler start noticing odd behaviour in their grandparents with Nana prone to running around the house at night like a lunatic, and Pop oddly attacking a stranger in the street for fear of being watched. Putting it down to the two simply being old, Becca and Tyler maintain their patience as they count down the days until they’re back home, but once they witness Nana wielding a knife in an attempt to break into their room, it’s clear their survival rests on more than just tolerance.

As the trailers have amped up the scare factor, audiences might be slightly disappointed that ‘The Visit’ seems more focused on sinister concepts and unnerving visions than all out horror, but it’s certainly not a negative as there’s enough jump scares to give the heart a decent jolt (one is particularly cheap but effective) and as Shyamalan has injected a serious dose of humour, it makes the scenarios more fun in the process; one demented moment which takes place in the kitchen blurs the lines of humour and horror so far that you won’t know which emotion to engage until you witness it for yourself.

Though the film isn’t consistently terrifying, Shyamalan certainly demonstrates he’s no slouch in the casting department as ‘The Visit’ works as well as it does thanks to his ensemble, with the young talent of Australian actors Olivia DeJonge and Ed Oxenbould leading the charge. The writer/director has always had a knack for evoking strong performances out of his young actors, and here is no exception with DeJonge acting mature beyond her years as the older, wiser sibling, whilst Oxenbould aims for crowd-pleasing status with mixed results as he admittedly earns a decent laugh or two with his penchant for uttering popstar names in lieu of curse words, but his insistence on being named T-Diamond as part of his faux-rap persona is as grating as the cringe-inducing verses he subjects us to. Hahn has a warm, likeable presence to her that is evident even in the briefest of moments she’s on screen (most of her work is relegated to Skype video chats) which is wonderfully offset by the terrifying performances of Dunagan and McRobbie as the off-kilter grandparents who, as expected, walk away with the film; the former gives a no-holds-barred turn, managing to switch from sweet and sensitive to unhinged and maniacal in the click of a finger, while the latter delivers a more subdued, quiet performance which only truly comes alive in the closing moments.

With his new-found (intentional) sense of humour, it’s possible that we may see more hybrid projects from Shyamalan as ‘The Visit’ feels like an organic fit for the once-promising filmmaker. His compulsion to deflate all that we have come to enjoy with a somewhat sappy conclusion is the trait he best abandons as there’s nothing wrong with making a film that doesn’t end of a feel-good coda; this is horror, we don’t need a perfect wrap-up. Overall though, ‘The Visit’ is a perfectly serviceable chiller, one with a twist that doesn’t induce groans and happily entertains in the process.