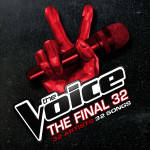 Hush Hush Biz with thanks to Universal Music have given us the first release from this season of The Voice – The Final 32.

We have 5 copies to give away and to have a chance to be in the draw for this go to [email protected]  and enter with your Name and Contact address and mobile  and answer this question as to who have been 2 of the current guests that have been assisting the judges of The Voice on Channel Nine. Entrees close on May 25th, Dont forget if you have not liked our page on FB and joined our twitter please go there too to stay tuned to all the news.

The first release from this season of The Voice, ‘The Final 32’ is available now!

Following hot on the heels of the final battle rounds, The Final 32, a 2 disc compilation of 32 of the favourite tracks from the #1 rating show THE VOICE, will be released today. Fans of the show now have an immediate opportunity to own this collection before these artists, including early fan favourites CELIA PAVEY, HARRISON CRAIG and IMOGEN BROUGH, head into the live finals.

The Final 32 is available at the usual music outlets as well as non-traditional music retail and is available digitally exclusively from itunes.

11 When The Levee Breaks Danny Ross

13 Somewhere Only We Know Michael Paynter

15 Something’s Got A Hold Of Me Danni Hodson

19 I Need A Dollar Nick Kingswell

22 Un Giorno Per Noi/A Time For Us Luke Kennedy

25 You Don’t Know Me Jac Stone