THE WORLD’S FUNNIEST AND NAUGHTIEST MAGIC SHOW back where it all started: The Naked Magicians in final stage tour!

Ben Stiller magic on stage naked by Caroline Russo | on July 7, 2022 | 0 comments | in Entertainment | Like it 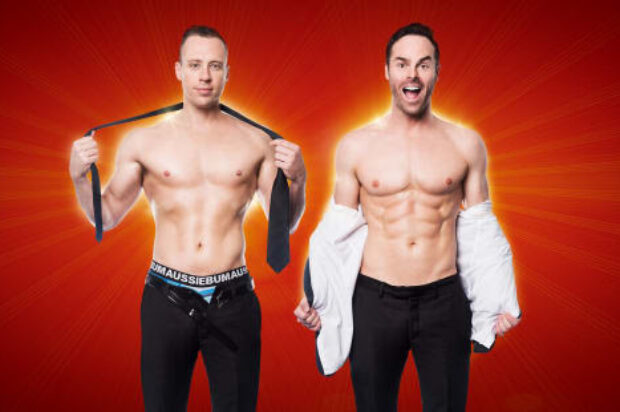 THE WORLD’S FUNNIEST AND NAUGHTIEST MAGIC SHOW back where it all started: The Naked Magicians in final stage tour!

PLUS behind the scenes: Ben Stiller, The Rock, protests in Kansas, a popped knees and awkward airport moments

It’s the show THE ROCK tweeted about! Ben Stiller was “comically confused” about it and it drew protests in Kansas! And it all started in Brisbane!

After sold-out shows in 300+ cities around the globe including a season on London’s West End, New York, and a residency in Las Vegas, one of Australia’s biggest entertainment exports, The Naked Magicians are performing limited dates around Australia in 2022 for their final time ever. Tickets available at NakedMagicians.com

Perfect for date night, the ultimate “Girls Night Out”, or for the gay guys, The Naked Magicians have performed — and undressed — for millions of fans in more than 300 cities worldwide making them the most successful Australian magic act in history. “Good magicians don’t need sleeves and great magicians don’t need pants,” says Tyler. “When we say ‘Abracadaba!’, the audience isn’t always looking at our hands.”

The broad-shouldered Wayne and proud owner of a freakishly long tongue is the first Australian magician in TV history to have his own TV series (More Than Magic). The sporty tan lines and incredible physique seen on stage hint at Tyler’s Speedo-wearing days when he swam competitively at the Australian National Championships and Pan Pacific Games before becoming a professional magician.

“Being on stage doing magic without relying on pockets or sleeves does add that extra challenge and ups our game,” Wayne says.

The Naked Magicians have also been seen on America’s Got Talent, Entertainment Tonight, Access Hollywood, and E!News.

Ben Stiller: It was our FIRST EVER live cross on American TV. We were in New York live with The Huffington Post, wearing nothing but our undies. All of a sudden we hear a commotion on set and Ben Stiller was standing behind us, looking comedically confused at these two Aussies staring at him in their jocks.

The Rock: While on tour in America, we were on one of the morning TV shows over there and did a mind reading trick that starts with the hosts thinking of a celebrity. The celebrity they happened to think of was Dwayne ‘The Rock’ Johnson. He happened to be watching and Tweeted the segment to his millions of fans saying how much he loved it. If he ever comes to our show we hope he doesn’t sit in the front row or he’ll block the money shot.

The Protest: This was when we wondered if we had officially made it. Arriving at our show in Kansas City, we were met with the infamous “Westborough Baptist Church”. They stood in front of our theatre and protested with the same signs they used to protest Keith Urban and the Foo Fighters. We offered them free tickets to the show, they declined…

The Knee: San Angelo, Texas: Nightmare material. San Angelo, Texas. In the middle of the show, Christopher’s knee blew out and dislocated. The worst part, the audience thought it was a trick and laughed and clapped whilst he lay screaming in pain – as naked as the day he was born.

Airport Security: Sydney, Australia – Mike was flying back to Brisbane and accidentally checked in the wrong luggage. He tried to get through security with a bag of props from the show (a blow up doll, rope, handcuffs, and all sorts). He was efficiently detained by airport security before he was able to convince them (thanks Google!) that it was all a very strange misunderstanding!

The Comedian: Christopher made the critical error of dating a well-known American comedian. Shortly after they broke up, she gave her first full TV comedy special. Although who she is will be kept a mystery, let’s say that one joke on that special is aimed right at Christopher’s lovemaking skills…or lack thereof.

For more information go to www.nakedmagicians.com