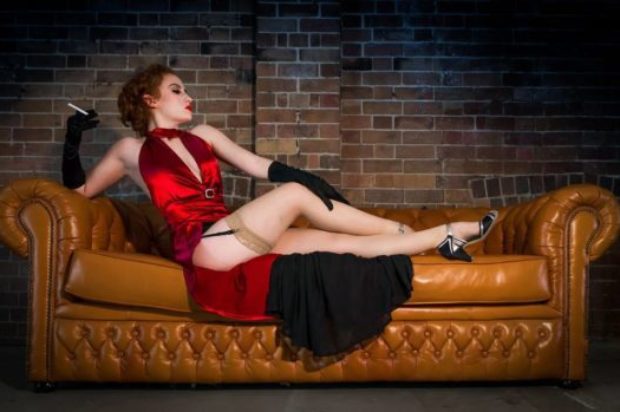 The Cluedo Interactive Game lives up to its name as it immerses you in the 1930’s world of Cluedo with every aspect. For roughly the first hour it presents itself as a themed party with the the actors all playing their respective roles. This themed experience was complete with a brilliant selection of food and drink. Throughout the night the characters of the story interacted with one another (as well as the attendees) to plant the seeds of various story plots leading up to the murder. After the murder has taken place, attendees are separated into groups to solve the case.

This production of Cluedo had the party host, Mr. Black played by Colin Smith, Mrs. White played by Jessica Kate Ryan, Miss Scarlett played by Geena Schwartz, Madame Peacock is alternated between being played by Aurelie Roque and Elizabeth Best, Professor Plum played by Joel O’Brien, Reverend Green played by Tristan Teller and Colonel Mustard played by Zane C Weber. These actors did a brilliant job at not only playing their roles and staying in character no matter what the audience threw at them but also at building the world of Cluedo through their performances. With performances of a less dedicated variety this unique experience wouldn’t have worked. A stand out of the cast was Zane C Weber as Colonel Mustard because he created a character that felt fleshed out and larger than life.

I highly recommend you go see The Cluedo Interactive Game as it is a theatre experience like no other. The world built by the cast and crew is both incredible and immersive. The actual game is a great group experience allowing you to problem solve in a unique environment and analyse your surroundings to solve the murder.

If you haven’t checked out this fantastic theatre experience already, you really should. It is an incredible theatrical piece and a social event like no other.