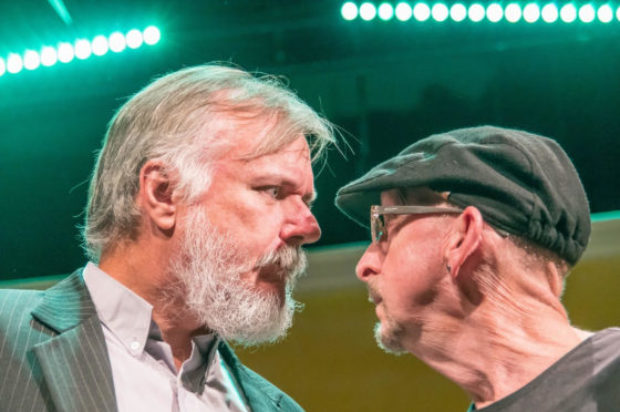 This classic Ray Cooney British farce is what used to be coined rib-tickling, good humoured end of the pier British comedy.
It’s unashamedly old-fashioned with its sexual overtones, smutty asides and laugh-out-loud good natured poke at all things human.
Run for Your Wife is never going to win a Tony or an Olivier but it puts bums on seats and has them rocking around as the comedy is infectious.
It’s a simply classical farcical situation as a London cabbie called John Smith – there’s not much original here – played by Noel Thompson finds himself caught out with two wives.

John would have lived happily, if not rather stressfully, in the situation but for an incident which completely rocks his tight knit routine.

The Hendersons, who hail from London, have been creating farce – and other dramas – on the Coast for more than four decades.

Indeed Dorothy, who joined the GCLT in 1975, has directed 23 shows with Ted and was the driving force behind the highly successful Gold Coast Comedy Players, which took theatre to the clubs for many years.

Farce is not for the faint hearted but it’s tried and tested as a crowd pleaser with the emphasis on timing particularly between Thompson (as John Smith) and his hapless neighbour Stanley played by Bob Allen.

There’s also some delightful support from Linda Furse and Natalie Stephenson as the two wives, Nathan Schulz and Bruce Alker Jnr as the two policeman and George Pulley as an incidental gay guy.

Run for Your Wife is not about sending messages, leaving the audience stunned and improving our understanding of the meaning of human existence.

It’s about an audience leaving the theatre with a collective smile and a sense that for two hours at least nothing really mattered and all the problems of the world were redundant.