THEATRE REVIEW DEATH OF THE SALESMAN

brisbane whats on QLD THEATRE COMPANY salesman by Caroline Russo | on February 16, 2019 | 0 comments | in Theatre | Like it 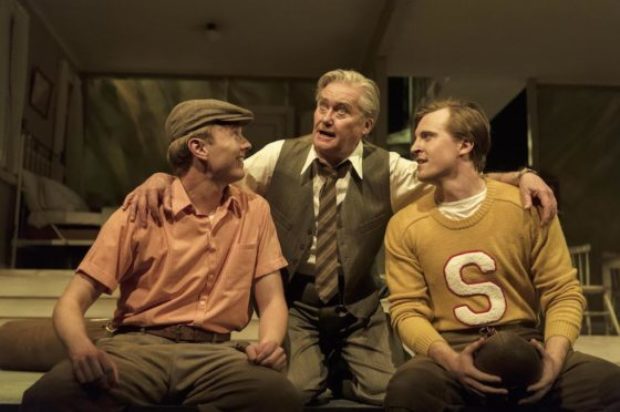 Death of a Salesman:
Review by Douglas Kennedy.

Since the Pulitzer Prize winning play, Death of a Salesman, was first staged back in 1949 it has been hailed as one of the great plays of the 20th century.

There is a reason for this – it is – and it is now one of the masterpieces of the 21st century.

If anything Arthur Miller’s debunking of the Great American Dream has grown in stature and reveliance.

The tortured ageing failing Willy Loman is still dancing as fast as he can this time in the shoes of outstanding Australian actor Peter Kowitz.

America, Australia and other western countries are peppered with millionaires and billionaires, but behind then are a myriad of struggling little men and women all sinking in a quick sand of hopelessness.

Willy is a battler on the road selling anything and everything, including his heart and soul, but at the end of the day there’s little to show for the sacrifice.

When he was young he was earning good money and rising a family – with wife Linda (Angie Milliken) – but now time and the tide of tiredness is taking its toll.

He can’t stay on the road for much longer, although there’s still a small amount of the mortgage to be paid, and the fridge keeps breaking down despite the fact Willy hasn’t paid it off.

The couple have two sons, Biff (Thomas Larkin) and Happy (Jackson McGovern), on whom they had placed great expectations.

Biff was to be the champion footballer with a college scholarship but he didn’t do his academic homework and his sport ultimately failed him.

Meanwhile, Happy relies on his charm and way with women, but one wonders how far that will get him in life.

Throw in a couple of women in the background – including a secret love Willy had on the road – and that’s this little man’s world.

The drama unfolds against the backdrop of Willy’s suburban house in the great American tradition beautifully realised by designer Richard Roberts.

Then there’s Miller’s beautiful dialogue so rich it deserves the moniker prose poetry.

If this is the America Donald Trump wants to make great again heaven help that country where disposable lives have been the norm for so long.

A terrific cast, some genuinely creative backstage talent and director Jason Klarwein have brought the salesman back to life with a contemporary flair worthy of the state’s foremost theatre company.
Runs until March 2. Bookings 136246 or www.qtiz.com.au