Javeenbah Theatre Company Ordinary Days. theatre by Caroline Russo | on September 18, 2021 | 0 comments | in Theatre | Like it 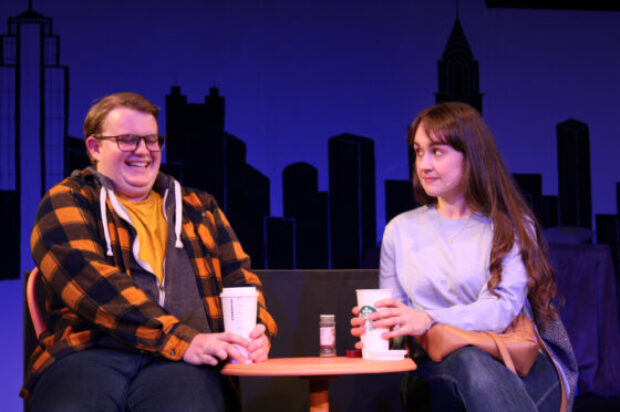 A wiseman – or maybe it was a wisewoman – once said there is no such thing as an ordinary life.
However, as those who live everyday lives know full well, much of life is made up of Ordinary Days.
Which brings us to the latest offering from Nerang’s own plucky little community theatre, Javeenbah, aptly titled Ordinary Days.
The sung-through musical, which has been co-directed by Rachel Love and Ricky Moss, tells the story of four New Yorkers coping with life’s simple dramas.
They might look uncomplicated to audiences looking into their world, but to the characters involved the dramas are all consuming.
There’s a couple, Clare (Rachel Love) and Jason (Lee Stoka), who are dealing with the stress and strain of moving in together and Warren (Jake Goodall) and Deb (Veronica Wnuk) who stumble on an accidental friendship, while searching for meaning in life. 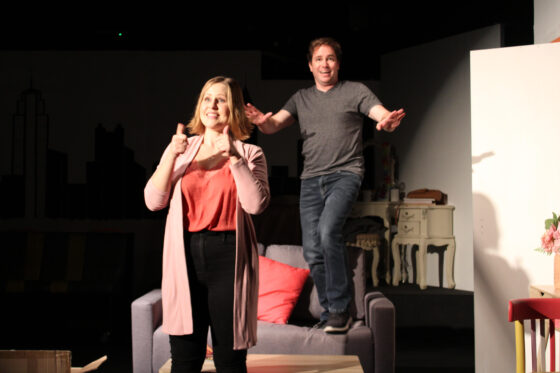 The show, which features 21 songs originally played New York’s Roundabout Theatre and then had off-West End (2008) and off-Broadway (2009) seasons before landing on our shores at Sydney’s Darlinghurst Theare in 2012.
So Javeenbah’s production is a Gold Coast premiere, which has an intimate style that suits a small theatrical setting.
Taking a closer look at the show, let’s deal with a term, sung-through musical, which is new to this reviewer, and I suspect audiences.
We are all used to the moniker, Rock Opera, thanks to classics of the medium such as Jesus Christ Superstar, Tommy and War of the Worlds, but it hardly describes Ordinary Days.
The show, in which lyrics of songs replace dialogue can hardly be described as rock, but the style of music belongs well and truly to the musical theatre.
So it should come as no surprise to learn that Javeenbah’s female answer to a young Orson Welles, Rachel Love, not only plays Clare and co-directs, but is also responsible for the musical direction.
For the record, the multi-talented Ms Love is also the set designer and does all jobs extremely well.
The set, for example, is a mobile configuration of chairs, tables and walls , with a New York skyline in the background, which easily slides into being an art galley, subway, roof top or apartment with a gentle push from the actors.
The show’s greatest strength lies in the characters and the conversational lyrics from the pen of Adam Gwon.
Each of them is a strong independent individual basically trying to navigate their way through life and coming to terms with who they are and who they want to be.
Warren (Jake Goodall) is a klutz, but an idealistic and warm hearted one, who is cat sitting for an eccentric artist serving time for dobbing his work through the city.
Deb (Veronica Wnuk) is a seemingly angry young grad grappling with the works of writer Virginia Woolf who has an accidental cute meet with Warren when he finds her notebook.
Warren is enchanted with the fairy tale chance meeting, but Deb is less than impressed with Warren or his choice of venue (at least at first).
While new lovers Clare (Rachel Love), who has a tragic past, and confused Jason (Lee Stoka) are struggling to come to terms with each other’s needs.
All four actors have both strong voices and a good sense of their characters, although more needs to be done to strike a balance between the vocals and the piano soundtrack.
Ordinary Days makes for a pleasant night at the theatre especially for those who have a passion for the American style of musical.

At a time when we are all longing to find a pathway back to community and everyday normality a trip to Javeenbah seems like an ideal proposition.
Javeenbah last show for the season -The Importance of Being Earnest opening November 19 – is a comedy classic with a new twist in the production.