gold coast theatre Javeenbah Theatre Company theatres in Gold Coast by Caroline Russo | on August 1, 2019 | 0 comments | in Theatre | Like it 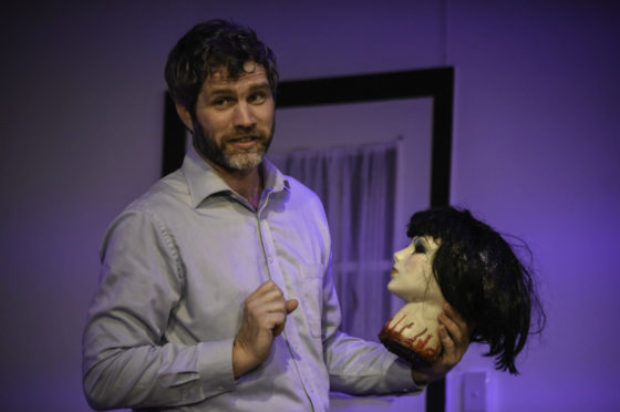 Painter Norman Bartholomew (Nathan Schulz) is a classic man-child living in what could be taken as a fantasy world in Anthony Shaffer’s puzzle play Murderer.

He is obsessed with UK murders and is forever quoting them and re-constructing their macabre world, but events are about to overtake him as the curtain raises on one of the Javeenbah’s most successful productions to date this season.

That’s about as much as I dare say about this extremely popular 1975 classic which powers through two hours of drama like a Formula One motor race.

It’s a show which could easier be stuffed up as it requires a carefully balanced approach moving from black humour to dark gruesome intentions, sometimes within a sentence.

Nathan Schulz’s Norman carries the bulk of the play and this long-time actor – probably better known as a director – gives the role just the right mix of delusional adult and petulant child. 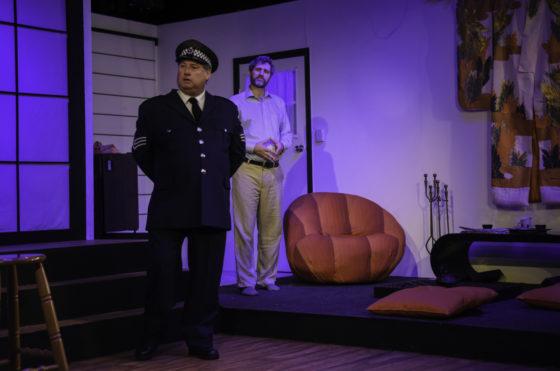 When I saw it along with a fill-house at a Sunday matinee one audience member expressed the view that Norman lived in a world somewhere between US serial killer Ted Bundy and Psycho’s Anthony Perkins.

The character has two women in his life – straight laced wife Elizabeth (Naomi Thompson) and flighty seductive girlfriend Millie (Ella DeVillers) – and a problem to solve.

The problem gives rise to his simplistic plan with the only complication being the arrival of the roly-poly policemen played by Trevor Love whose innocence gives Murderer another comic dimension.

However, there’s more to Shaffer’s play than a clever plot as the dialogue has a sophisticated style that lift this play well above the ordinary

Murderer also boasts a first class set – the play unfolds in a country house with a Japanese theme – that includes a bathroom with a screen that throws up shadows featuring some of the most heart-stopping action.

Murderer has only three more outings in this season – Thursday, Friday and Saturday nights – but it’s well worth a visit to the theatre.

Go and be entertained and perhaps a little bit frightened if only for a couple of hours.