Theatre Review …….. next to normal

#mentalhealth Gold Coast stage events theatre by Caroline Russo | on September 19, 2022 | 0 comments | in Theatre | Like it 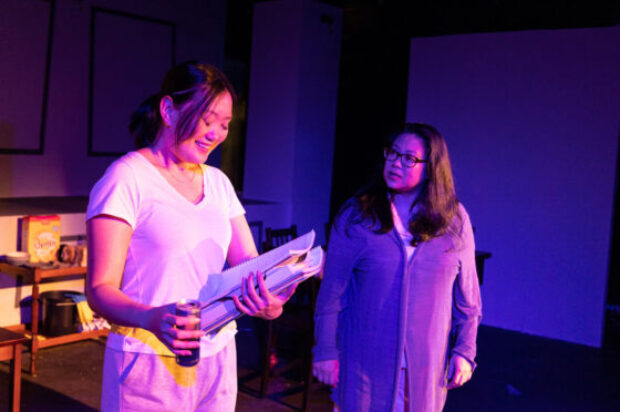 A serious story of a suburban housewife’s long
battle with mental illness at first glance seems an
unlikely choice for an American rock musical.
But then there’s more than a few features of next
to normal (the styalised lowcase title among them)
which makes it a standout show.

This Pulitzer Prize winning musical, with minimal
dialogue, now having a season at Nerang’s
Javeenbah Theatre Company, is a winner despite
the odds.
Diana Goodman (Rowena Orcullo Ryan), who has
been diagnosed with bipolar disorder, is dealing
with grief and depression while her largely loving
family watch on with fear and trepidation.
The result is a bittersweet confection of mixed
emotions, peppered with unintentionally humour,
which boils over into near tragedy.
This show’s sweetness comes with its engaging
human narrative, which captures the imagination,
while the bitter pill is taken with the sad reflection
that mental illness is so much a part of modern
life.
In addition to depression, next to normal explores
sensitive issues such as chronic grief, drug abuse,
modern psychiatry and suicide.
This is all happening in normal suburban life so
audiences should be aware that some might find
this work disturbing, despite the toe-tapping
soundtrack.

Director Nathan French and musical director
Taylor Holmes have done a splendid job of
weaving the characters together, particularly in the
39 or so musical items which strings the piece
together.
It's worth noting that two of the three Tony
Awards for next to normal, when it opened back in
2009, were for Best Original Score and Best
Orchestration.
(The third Tony went to Alice Ripley for Leading
Actress in a Musical).
The show opens with mum Diana (Ryan) waiting
up for her teenage son Gabe (Hunter Wall) who
without giving any spoilers away is the driving
force behind the show’s narrative.
However, soon it’s morning when we meet Dad,
calm and steady Dan (Lee Stoka) and teenage
daughter Natalie (Yasmin Fitzgerald) who is a
headstrong student with a passion for music.
The other three characters – outside of the family
circle – are Henry (Peter Santos) who becomes
Natalie’s sweetheart during the show and the
progressive doctors treating Diana Dr Madden and
Dr Fine (Mitch Walsh).

Each of the six-person cast comes to the
production with a solid theatrical background and
has a commanding presence on stage.
But what works so well is the interaction between
the characters as we witness Dad’s struggle to
cope and Natalie’s feelings of neglect.
The sibling Gabe has another role to play but
everyone knits together in a striking human
tapestry.

A special note should be given to the technical
creatives including Tony Odling’s set design,
which reflects both the mood and structure of the
family and Colin Crow’s lighting design, which
fits splendidly.
This Javeenbah production is a worthwhile piece
of theatre which deserves an audience, but for
some it may well touch a raw nerve.
Note: Only 10 musicals have won the Pulitzer
Prize for Drama and apart fron next to normal they
include South Pacific, A Chorus Line and
Hamilton.