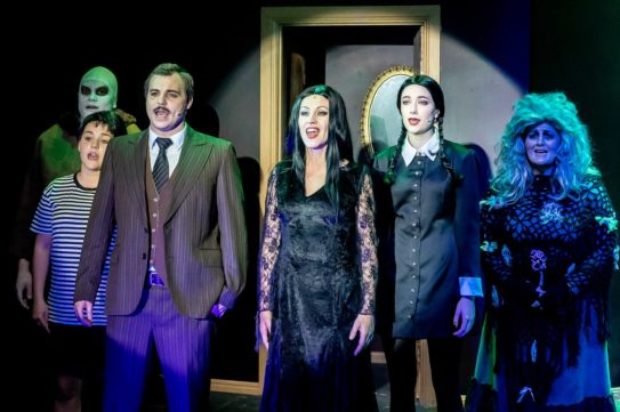 The Addams Family – The Musical: Review.

The Addams Family– The Musical by Marshall Brickman and Rick Elice with music and lyrics by Andrew Lippa. Based on characters by Charles Addams. Ensemble Cast. Gold Coast Little Theatre. Directed by Jay Ahrens. Runs until September 28. www.gclt.com.au or 5532 2096

The kookie family with a macabre sense of the absurd, which began life as a Charles Addams cartoon, and wooed TV audiences in the 1960s finally went to Broadway in 2010.

The award-winning musical, which ran for more than 12 months (no mean feat on the Great White Way), had some built-in safeguards which guaranteed it an audience. 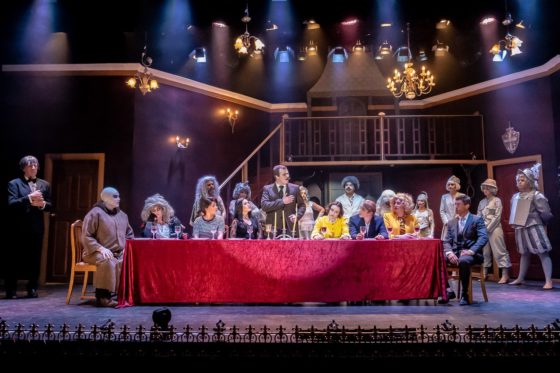 Now veteran Gold Coast Little Theatre director Jay Ahrens has picked up the show, put to together a top flight community cast, and delivered a polished production that’s bound to make a merry tune at the box office.

The Addams Family story might be new – the producers wanted to avoid stitching a couple of TV episodes together – but the line-up of characters are tried and tested.

Heading the familiar line-up are the Addams family patriarch and matriarch, Gomez and Morticia Addams (Daniel O’Connell and Cat Deller), who make all the right moves and conjuror up warm memories of the TV originals.

There’s even an appearance – around the curtain – from Thing (anonymous) who pops up in the interview to draw the traditional interval raffle.

The script is an engaging blend of the old and the new as we learn that Wednesday is growing up fast – ‘she’ll soon be Thursday,’ quips Gomez – and has fallen for regular teenage heartthrob Lucas Beineke (Nic Van Lits).

This causes some family tensions but the stakes are raised when Lucas’s conservative dad and mum, Mal and Alice (David Law and Peta Simeon), come to dinner.

Naturally being an off-the-wall comic family there’s all sorts of complications, including a mix up with a dodgy mind-altering tonic, a couple of close shaves with Wednesday’s cross bow and a chorus of ghostly ancestors.

But just to demonstrate that the Addams mob have some traits that are experienced by so many other families there’s a series of familiar communication breakdowns.

While Andrew Lippa’s music and lyrics are hardly classics they service the story well and the whole cast was in fine musical form on opening night.

The production team – too long a list to include here – deserve a special mention as the Addams family set, the costumes and lights were all par excellent.

The Addams Family: The Musial is a fun-filled night at the theatre, which is bound to bring a retro smile to the faces of older audiences, and please the younger demographic.

The show deserves – and probably will be – one of the GCLT’s hits of the 2019 season.