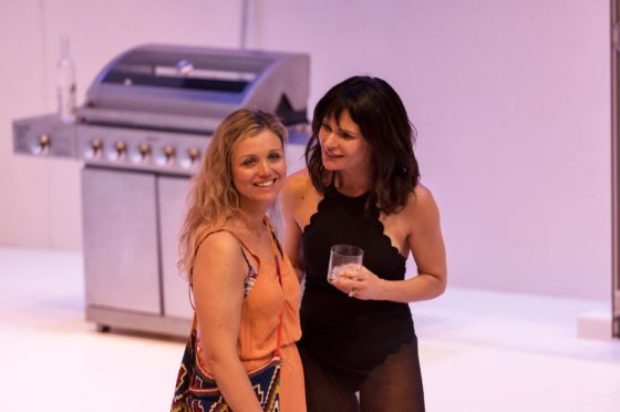 Queensland Theatre has had a strong year in 2018 with stellar productions such as The 39 Steps, Black Is The New White, Twelfth Night, The Longest Minute, Jasper Jones, Nearer The Gods and Good Muslim Boy. In true style they are ending this year with a unique re-imagining of Henrik Ibsen’s Hedda Gabler.

Ibsen’s classic has stood the test of time. The formidable character of Hedda has graced many stages for years with names such as Cate Blanchett, Glenn Close, Lauren Bacall, Isabelle Huppert, Jane Fonda, Diana Rigg and more recently Ruth Wilson in London. Wenworths’ former leading lady Danielle Cormack takes to the stage as a Hedda we haven’t seen before.

Director Paige Rattray and Playwright Melissa Bubnic have relocated Hedda to the Gold Coast where the mayhem will ensue. The setting naturally works to strike a chord with its audience. The aristocratic family that Hedda has married into is replaced by a well to do family who have made their fortune in methamphetamines. Hedda has come from Melbourne to the sunny Gold Coast where the UV rating is alarmingly high, even for the audience.

Heddas’ new husband George Tesman receives a visit from the bosses’ daughter Thea (Bridie Carter), a recovering ice addict who has fallen for Ejlert Lovborg (The Straits Jimi Bani), a former employee of the family who has recently been released from prison. The corrupt family friend Councillor Brack (Joss McWilliam) is a constant presence at the house, lusting after Hedda. And then there is Georges Aunt (Andrea Moor) the matriarch of the family, a female figure who stands in the way of Hedda’s ambition in her new city. It is Loveborgs’ release that sets in motion as series of events that affect everyone within the family circle.

Bubnic, has written an extraordinary piece of work that will resonate with audiences. Hedda is a beautifully crafted work that packs a punch. The cast are a tour de force led by Cormacks’ brilliant portrayal of Hedda. Bridie Carter stands out as the lovelorn and devoted Thea, while Andrea Moor is a scene stealer every time she appears on stage as the business savvy and family orientated Julia. Joss McWilliams does wonderful work here as Brack, achieving a perfect balance of creepy and charismatic.

Hedda runs until December 8 at the Bille Brown Theatre. Tickets available at http://www.queenslandtheatre.com.au