THEATRE REVIEW … THE KING AND I

GCLT GOLDN COAST THEATRE King and I Stage Shows theatre by Caroline Russo | on November 24, 2019 | 0 comments | in Theatre | Like it The King and I

There’s a general acceptance that Richard Rodgers and Oscar Hammerstein II created five masterpieces in the 1940s and ‘50s and one of them opened at Broadway’s St James Theatre on March 29 1951.

The King and I, which tells the story of Anna Leonowens’ stay in Bangkok as a governess to the despotic King of Siam’s legion of children in the 1860s seems like an unlikely scenario for an American musical, but has been hailed as the writers’ most deeply emotional works. 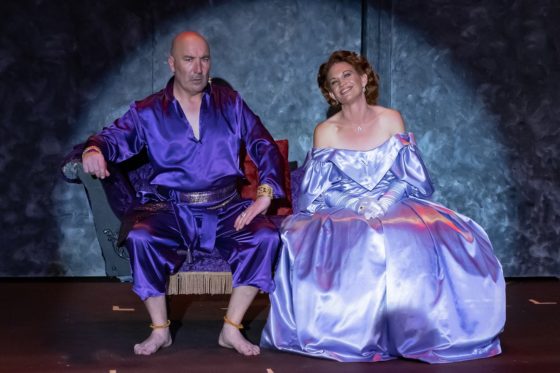 Now it returns to the Gold Coast Little Theatre stage in a worthy production which has all the pomp and ceremony associated with the classic musical.

Kellie Wilson and Malcolm McKenzie shine as Anna and the King, but there’s a depth to the cast which deserves credit as they embrace this wonderful and memorable music.

The standout numbers include Whistle A Happy Tune, Hello, Young Lovers, March of the Royal Siamese Children , Getting to Know You, A Puzzlement and, of course, the sweeping Shall We Dance?

Today, to some, it might all seem a little dated, a product of the `1950s, but the charm and musical magic still lingers for many.

Not surprising the matinees are all but sold out but if you have the chance it’s a show well worth catching.
In addition to the leads the stand out talents include Rowena Orcullo Ryan (Lady Thiang), Annie Fang (Tuptin) and Flynn Anderson (Prince Chulalongkorn) who all give 110 per cent.

The tech crew also deserve a special mention as the set, costumes and lighting all enhance what is a captivating and ultimately moving time at the theatre. The Small House of Uncle Thomas still – after all these years – stands out as one of the most entertaining and funniest set pieces on the post-war stage.