David Williamson gold coast theatre by Caroline Russo | on July 6, 2022 | 0 comments | in Theatre | Like it 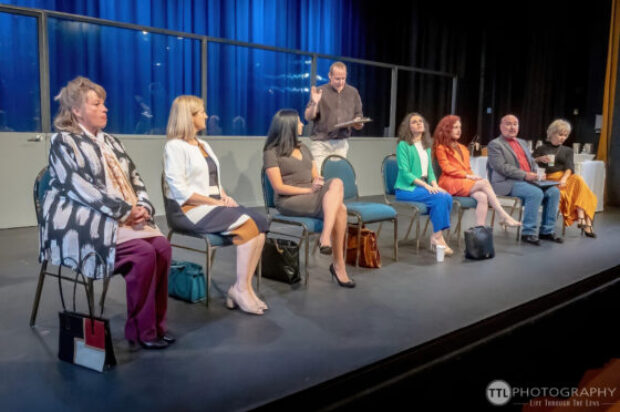 If anyone doubted that, stripped bare, work is little more than psychological warfare they need go further than David Williamson’s Charitable Intent.
This shape 80-minute exploration of the cut and thrust of life at the office coal face is a rare opportunity to expose the shortfalls in human relationships between workers and management.
Williamson’s format, which features six female operatives, a mal board chairman and a male facilitator, sitting for the most part in a line across the stage, allows the team at a not for profit outfit to air their differences.
And it quickly becomes apparent that, ironically, the mood at Enabling and Caring, which is meant be supporting the intellectually and physically impaired, is toxic.
Each of the participants has their own agenda and bullying behaviour appears to be rife as the cool, professional, veneer of the group begins to unravel.
Williamson’s storytelling and dialogue has a whip-cracker style, which sees issues unpacked at a lightening pace. That keeps the audience alert from start to finish.
Charitable Intent is the third and final installment in Williamson’s community conferencing trilogy, featuring professional mediator Jack Manning (Sean Curran).
The play opens with two distinct camps opposed to each other. In one corner there’s Amanda (Kate McNair) and Stella (Tamara Hamilton) who feel somewhat oppressed.
In the other there’s the team of human resources manager (HR) Tamsyn (Dee Nand), public relations manager (PR) Giulia (Jam Marshall) and
finance manager Cassie (Catalina Palma) under the guidance CEO Bryony (Tara Page).
Meanwhile, the board chairman Brian (Phillip Victor) is in the line-up to listen and learn.

The establishing set-ups, however, soon begin to disintegrate as buck passing, blame shaming and bullying become the order of the day.
In the grand tradition of books such at Lord of The Flies and movies like A Few Good Men, the mask of civility begins to slip away as true colours shine through.
There’s bound to be tears before bedtime as Jack Manning works to hold things together as the dam walls begin to crack.
Director Gael Ballantyne has done a suburb job of bringing a fine cast together and than carefully choreographing the unfolding of the narrative so this human onion is forensically peeled away.
Tara Page has the ‘to-die-for-role’ as Bryony and doesn’t waste the opportunity, while Kath McNair’s Amanda is a wonderful victim. While we are tempted to pity her there’s an overriding suspicion that in real life she would quickly become profoundly irritating. The rest of the ensemble is suitably cast, and the production is a real cracker. Catch Charitable Intent if you can and then take a hard long look in the mirror.
I did and I am happy to report that I am blameless. But then I am a mere male.
Note: Carey Parsons plays the conference manager who is seen briefly at the beginning of the play.