Actors gold coast theatre Metamorphoses stage and theatre by Caroline Russo | on June 20, 2021 | 0 comments | in Theatre | Like it 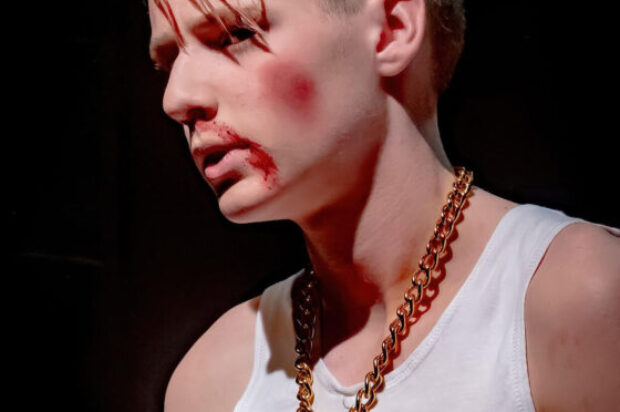 Metamorphoses (based on the myths of Ovid) by Mary Zimmerman.

While there’s a place for tried and true shows, following a traditional and safe path, Metamorphoses represents a gesture of inclusion to a new generation of theatre goers.
Saturday night’s opening attracted a large audience of mainly younger theatre goers who seemed to appreciate a new take on one of the great classics.

Metamorpheses is considered Ovid’s masterpiece, but US theatre icon, Zimmerman, using David R. Slavitt’s free-verse translation, creates moments of remarkable prose poetry.
Ovid, who was a contemporary of the old Latin poets, Virgil and Horace in the time of Caesar Augustus (63BC-14AD), created his masterpiece in a series of vignettes.
Zimmerman follows this pattern with nearly a dozen stories peppered with familiar names from Greek legend – King Midas, Orpheus and Eurydice, Narcissus, Eros and Psyche and Baucis, among others.

The telling is largely easy to follow, starting with the Greek explanation of the creation of the world, known as Cosmogony, from chaos, and continuing with King Midas, whose touch turned everything into solid gold.
The script is at times bitter-sweet and there’s plenty of witty humour, thanks largely to colourful performances from the large, mostly youthful, cast of 14.
There are some stand-out performances throughout the show, although team work is the most important ingredient in the play’s success.
The behind-the-scenes creatives also deserve much of the credit with director Chapman creating the distinctive single set with its impressive water feature.
Chapman, who is a multi-award winning director and actor, has made a name for himself as one of Australia’s leading drama and theatre educators.
This reviewer won’t single out anyone of the cast members. They all played their role, but I have acknowledged them in the header at the top of the review.
Metamorphoses also features music and some dance in Zimmerman’s elastic interpretation of the original.
Coming away from the Southport theatre this review couldn’t help but feel a connection with the birthplace of civilisation and the universal themes explored, which have shaped drama since the dawn of civilization.
Those include greed, jealousy, a nod to the Gods and the human race’s most enduring quest to understand and interpret love in all its forms.
Among the awards earned by author and director, Mary Zimmerman, was a Tony for best director and another nomination for best play.
On a trivial note Zimmerman shares her name with Bob Dylan – he was born Robert Zimmerman – but this reviewer can’t find any evidence that she’s related to the singer-songwriter, who is regarded among the world’s best.
On the house keeping side of a visit to the GCLT, it’s worth noting that there’s now a small fee for parking in the vacant next to the theatre, but the down side is that a smart phone app and credit card details are required to pay.

This may prove to be a problem for some patrons.