This Queensland Theatre show, in association with the Melbourne Theatre Company and Dead Puppet Society, is first class entertainment.

For once audiences can leave the theatre reveling in the production’s technical contributions without feeling that the performances, narrative or dialogue have in anyway let them down.
This production of Storm Boy, playing at QPAC’s Playhouse Theatre, is a delightful marriage of theatrical production skills under the direction of QT’s artistic director Sam Strong.

Strong uses the wonders of state-of-the art mixed media to great effect including a cinematic backdrop of the coastal wilds of the South Australian Coorong, superb lighting and sound effects and puppets as the pelicans, birds and penguins that inhabit the region.
He does this without losing the power of the human story or the three characters who populate this region with Hideaway Tom (John Batchelor), Storm Boy (Conor Lowe) and Fingerbone Bill (Tony Briggs) all bringing strong individual voices to the stage.

Thiele wrote Storm Boy more than half a century ago, and the 1976 movie still resonates with many, and playwright Tom Holloway’s is faithful to the original narrative.
However, Holloway has given the dialogue a fresh, gentle, overlay which makes for charming middle-of- the road entertainment with broad appeal.

Storm Boy (played with great sensitivity by Conor Lowe) lives with his reclusive father, Hideaway Tom (John Batchelor) in a tin hut on the coast, where the twosome earn a living fishing.
The audience quickly senses that while the father and son have a great bond there’s something missing in their lives, as Storm Boy is missing his mother and Tom is among the walking wounded.
However, their world is about to be turned upside down when Storm Boy meets the likeable fun loving indigenous loner Fingerbone Bill (Tony Briggs), who has his own sad backstory.
The two become fast friends – Fingerbone gives the lad his moniker – although Tom has reservations about the relationship at first. 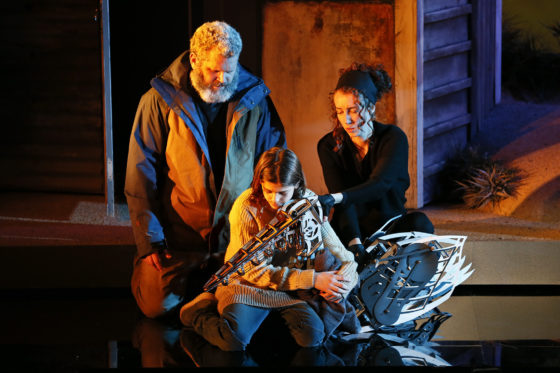 Fingerbone introduces Storm Boy to the wonders of nature, including three orphaned pelican chicks, which the lad adopts despite Tom’s objections.

In the cause of the 90-minutes Storm Boy learns about life, love and loss as he raises the pelicans and forms a particularly attachment to one named Mr. Percival.
While Storm Boy might sound on paper overly touchy feely there’s unseen drama in the background courtesy of unthinking duck shooters and a tempestuous and dangerous storm.

The Dead Puppet Society, who created the internationally acclaimed The Wider Earth bring Mr. Percival to life and give him a willful, mischievous and ultimately loving personality.
Storm is truly a well-rounded, well written and engaging piece of theatre with broad appeal.