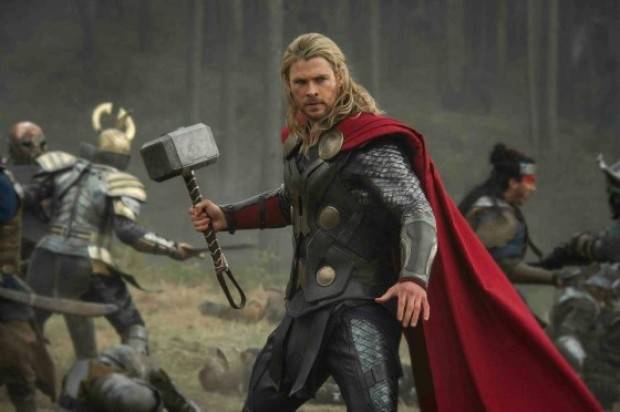 CINEMA RELEASE: THOR: THE DARK WORLD
Release date: 31st October 2013
Director: Alan Taylor
Cast: Chris Hemsworth, Natalie Portman, Anthony Hopkins, Tom Hiddleston, Kat Dennings, Stellan Skarsgard, Rene Russo, Christopher Eccleston, Idris Elba
Classification: M (Action Violence)
Review by Peter Gray
With his trademark hammer in tow, muscles suitably bulging and red cape skirting in the wind, Chris Hemsworth’s undeniably charming Thor wields back onto the big screen in a sequel that feels like it should be bigger and better than its predecessor yet can’t quite overcome its unwieldy plot. That’s not to say that this particular secondary outing is bad just perhaps a bit disjointed with director Alan Taylor, taking the reigns over from Kenneth Branagh, unable to masterfully handle the transitions between Thor’s far-away existence on Asgard and the rainy locale of London, where much of the film’s (admittedly spectacular) climax takes place.
At only 112 minutes ‘Thor: The Dark World’ reigns as the shortest Marvel film to date and, as such, doesn’t drag or overstay its welcome, a worthy additive considering the plot is a little messy. When a species known as the Dark Elves are unexpectedly awoken by astrophysicist Jane Foster (Natalie Portman), a process in which during she absorbs a wanted mythical power, their leader Malakith (Christoper Eccleston) sets his sights on conquering the 9 realms, of which Earth is one. Given what Jane and Thor experienced together in the original film, it only makes sense that he rush to her side to assist, and so the duo are off to Asgard in hopes of making sense as to what has consumed her. Unfortunately all the realms are in danger of being consumed and naturally, and thankfully for us as the audience, Thor’s traitorous brother Loki (Tom Hiddleston) appears to be the only hope in helping restore harmony.
It’s not presented as straight forward as that, but you get the gist and what the film lacks in cohesion it makes up for in spirit and, surprisingly, humour. Without Robert Downey Jr’s quick witted Tony Stark in close quarters to provide his usual brand of comedy, it’s quite a feat that this film is as funny as it is, and it’s all the better for it. Though he only appears in two short scenes, Chris O’Dowd provides plenty of value as a would-be suitor to Jane, which in turn affords an endearing streak of jealousy in Thor, whilst Kat Dennings as Jane’s intern Darcy livens up every scene she’s in with her bubbly brand of pert humour. Stellan Skarsgard also deserves a mention as Dr. Erik Selvig who appears to be at his brightest when wearing very little clothing – a note which leads me to inform that you’ll see more naked Skarsgard than you will Hemsworth. Sorry ladies but our titular God only gets his shirt off for the briefest of moments in a completely unnecessary shot.
Given that this is a ‘Thor’ film though, it makes sense that it is Hemsworth and Hiddleston who rule with supremacy. Coming off of ‘Rush’, Hemsworth once again provides ample charm and a surprising amount of emotional depth, but if you find it difficult to avert your eyes from him it’s damn impossible with Hiddleston whose striking features and slimy manner are intoxicating to view, and make the perfect ingredients for a villain we love to hate.
As to be expected the film is presented in 3D, but without there being any particular reason for it, it comes off more as a sales gimmick rather than an additive to the production. The film’s effects look polished though, and the aforementioned climax is one of the most exciting sequences seen to date in a Marvel film, allowing ‘Thor: The Dark World’ to sit comfortably in the realms of comic book outings that have translated well to the big screen. It may be more uneven than we’d like it to be, but it’s big, exciting, and very funny, and a nice reminder that not all comic book films have to go down the dark (Knight) path.
Oh and yes there is the obligatory post-credit scene, in fact we get two here, but be warned – you may not like what you see.
My rating 3.5/5 (Thor-some)